Stranger Girl show us their ‘Bad Side’ on their glorious new single. 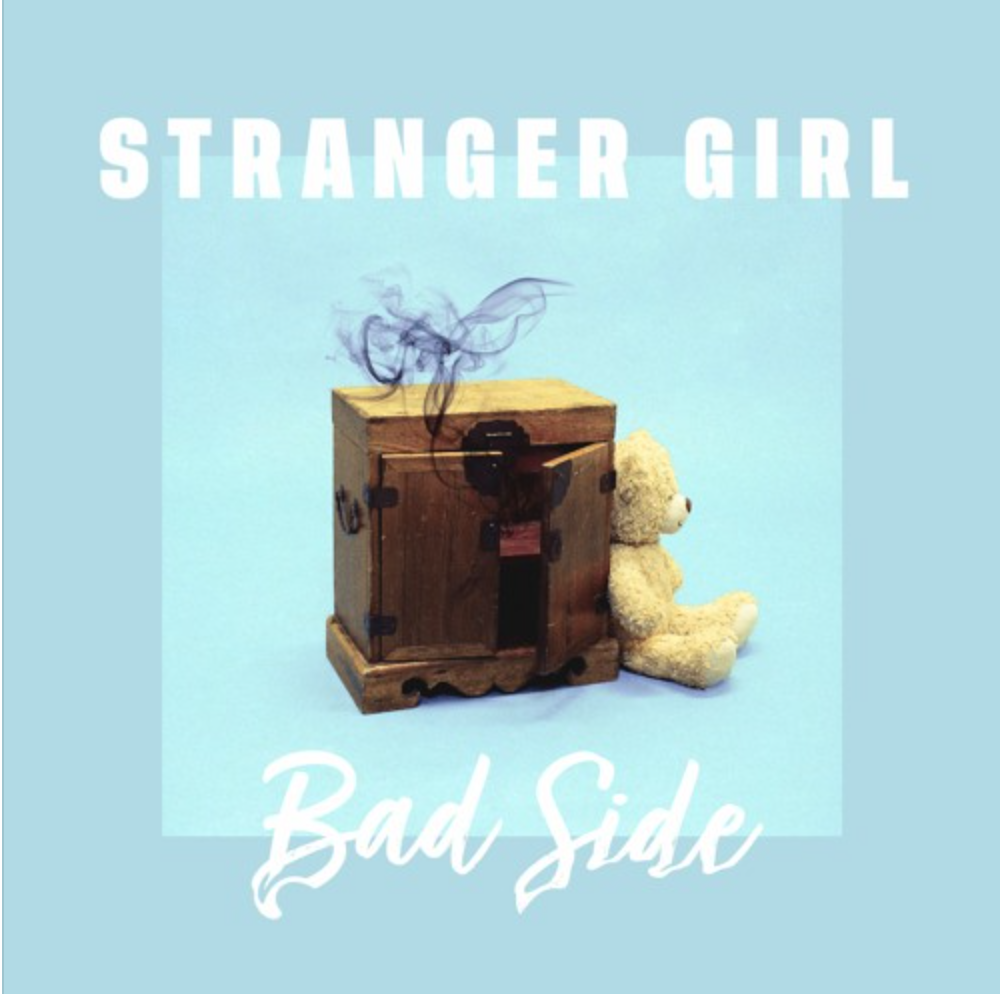 Last year’s trio of singles from South East-based indie darlings Stranger Girl saw them, amongst other accolades, hitting BBC Introducing’s Track of the Week. Now, despite Covid, lockdown, and the dearth of gig opportunities currently threatening the music scene across the UK, they’re back with 3’10” of gorgeous, glittering alt-pop in the form of new single ‘Bad Side’.

Take a large portion of Sleeper and Elastica and a little of an imaginary female-fronted Candyskins, mix them up in a huge Britpop cauldron with a liberal helping of Blondie and The Strokes, and add in some ‘21st Century’ flavouring for good measure, and you’ve pretty much got the recipe for ‘Bad Side’. It’s sublime, an absolutely perfect slice of classic, chart-ready indie-pop. Singer Melissa sounds like Louise Wener with a side-order of Saffron from Republika and a little of the obvious Debbie Harry, the guitars shimmer and sparkle, and the sparse-but-snappy rhythm section powers and bounces the track along. There’s rawness but humour in the lyrical storytelling, but amidst the melancholy and geekiness there’s a hook that sticks in your head alongside the shouty gang vocal chorus. It’s upbeat, poppy, and just a little bit fantastic.

5 piece band Galloway glide in with the fresh new trim track ‘Buzzcut‘ and this is a song that gets your attention real fast and sweeps you off your feet.

Galloway are based outta Boone in North Carolina and they combines aspects of indie, rock, pop, and alternative to fuse into a tasty ice-cold beverage of cool music to keep you happy in 2020. This is the indie feel-free type of music that heals all as one. This is the song you turn up and close your eyes, you feel the goodness as it is glistened into your ears.

‘Buzzcut‘ from Galloway is all about keeping things simple with friends. Hanging with friends has become so much tougher but you know you need in life. To be really happy that is. This is a group that is only making true music for the soul. They avoid fake radio style music and this is the type of music we all need to support.

In the standout single “One Night”, raw, unfiltered emotion lies under the smooth polished production before it tears through whenever Ethan Senger’s vibrato vocals come into play. He’d seriously give Eddie Vedder a run for his money while leaving fans of Paul Simon transfixed.

The alchemically reverb-drenched blend of Rock, Pop and Folk allows the soundscape to simultaneously exude authenticity along with accessibility. But One Night isn’t a track you simply ease into, it’s a track which takes full control of your emotions and compels your mind to scramble for romantic nostalgia.

You can check out Ethan Senger’s single One Night via Spotify.

Triple Aidan drops the catchy truth anthem and visuals for ‘I Wonder‘. This is where piping hot pizza and pure truth dough, mixes together to cook us a truth music meal to fill you up.

This is a singer, lyricist and an artist who loves to evolve and create. Create music that all ages can enjoy, the beat is fussy and makes you sing along. There are Pop and Rock influences here with always a party vibe, Triple Aidan is a quality act who is finding his niche. The pizza fan cooks us up a tasty treat here.

You love her so much but you can’t be together anymore. The truth never comes out and you are tired of these lies. You wanted this to work but the whispers have become louder. You can hear them and you want the real thing now. A woman who is your life partner and you are truthful together.

There is so much to love here. ‘I Wonder‘ is a fine, classy breakup anthem that is so truthful. Tired of dealing with Insta and all it’s self-indulgence that has seeped into her soul, this is a song about moving on from it all.

The latest single “Bad Name” from up and coming Indie artist Rya Park isn’t to be missed. Especially for fans of Amy Winehouse, Garbage, Arctic Monkeys, Lily Allen, and The Black Keys.

The Australian artist mixes the soul of Winehouse, the magnetic attitude of Shirley Manson, and absorbing Blues Rock riffs similar to The Black Keys. All wrapped up in a polished, pulsing, visceral massive sound which Arctic Monkeys used to offer before Alex Turner tried to assimilate Bowie.

It’s quite a potent mix. And it leaves us with no question about how much potential lingers in Rya Park’s resounding approach to Indie. Another thing it leaves us with is an all too welcome Indie Pop earworm which means that Bad Name will require repeat attention.

If you’re ready for that much aural commitment, you can check out Bad Name for yourselves by heading over to SoundCloud now.

“Mr Square” is the latest single to be released by the experimentally pioneering, unfuckwithably fabulous up and coming artist Gelax.

Without any hint of hyperbole, I may have just stumbled across my favourite new artist in 2019. From the very first time of hearing Mr Square, the taunting, sardonic nature of the lyrics hits you along with the unique sense of satisfaction through listening to such convictive lyricism laying down an aural attack on misogyny.

The same instantaneously gripping effect is something that I have only ever experienced through hitting play on any of Amanda Palmer’s (Dresden Dolls) tracks. And that’s certainly not a comparison I make lightly.

Despite the angst behind the inspiration of the soundscape, the lyrics are versed through reflectively hazy vocals which sit in perfect synergy with the instrumentals which share the same lucid textures until the basslines come in to dominate the soundscape through blistering grooves.

You can check out Mr Square along with Gelax’s earlier released singles for yourselves by heading over to Spotify now.

Rand Bowman – ‘I’ll Be on My Way’ – Delicately Rhythmic Rock

In recent months I’ve become no stranger to Rand Bowman’s compositions of guitar-driven mastery. Whilst his earlier tracks such as ‘Lose My Mind’ hit me with a decadently raucous energy which was all too easy to get caught up with, his latest 2018 single bruised me in a completely different way. You could taste the melancholic soul which was perceptibly poured into his single through the vocals and the poignantly penned lyrics.

The sentiment to ‘I’ll Be on My Way’ may have been pensively deep, yet the jangly progressions which came curtesy of Rand Bowman’s fretboard precision uplifted the track. There is no overstating how uniquely vibrant Rand Bowman is on guitar, match that with his sensuously soft Rock vocals and you’re in for one hell of a treat… and that’s before you get to the intangibly delicate riffs.

You can check out Rand Bowman’s latest single I’ll Be on My Way by heading over to SoundCloud now.

Fans of Paramore, Kelly Clarkson, Taylor Swift & Avril Lavigne (does she still have fans?) rejoice, there’s a new soulfully sensational Pop Rock singer on the scene. Where Abigail has been hiding with her empoweringly resounding sound I have no idea, yet, all I can say is I’m so glad I found her. Her 6 track 2017 album Avalanche is full of domineeringly orchestrated soundscapes which will stay with you for long after the album has faded out. It is evident that Abigail poured her all into her first ever album, with track names such as Sober, Hurt Alone, and Gaslight, her pensive approach to her Pop Rock style may be reminiscent to many other acts that have come and passed before her but there’s no disputing that she’s in an element of her own. Her concluding track on the album Gaslight was one of the most evocative sounds I’ve heard for anyone who has ever dated a narcissist, consider the track an essential listen. Just grab the tissues first.

You can check out Abigail’s frankly spectacular album Avalanche on Spotify now.

‘I don’t care about your news feed you little prom queen’ Tell me one other lyric that perfectly captures the post breakup angst in the millennial age better than that. As soon as Zack Stilner’s debut single News Feed kicked in, I couldn’t help but smile at his sardonically glorious approach to sound and lyricism. There’s something infinitely warming to his Folkish, Indie Pop style that immediately resonates and draws you in. This may be the best song of its ilk since Nada Surf released Popular back in 1996.

The South Carolina based Rock, Pop, Country (basically a little bit of everything) artists created his debut track through his passion to create a fresh sound, to say that he delivered may be the understatement of the century. Stilner’s soothingly raw vocal style paired with the punchy Pop Rock riffs have won him a firm place on my playlists.

You can check out Zack Stiltner’s smile-invoking track News Feed on Spotify, give him a follow to stay tuned to all of his new releases he has in his genius pipeline which will drop later in 2018.