Australia’s wittiest pop-rock outfit Urban Cafe Crew launched a riotous attack on the generation that set every subsequent one up for failure with their latest single, Hey There Boomer, It’s Not OK.

Every millennial and Gen Z can derive vindicating catharsis from the playfully scathing track that finds an antagonistically hooky way of relaying every boomer sin that has left the earth scorched and financial security out of reach for the majority.

But hey, the boomers had it the worst, right? Their determination to make the world worse for their offspring is warranted, right? They have a right to see any signs of social progression and drag it back with their knuckles that have scarcely been lifted off the floor since 1989, right?

Hey There Boomer, It’s Not OK was officially released on January 14th; check it out on SoundCloud.

UK Trio The Horizons Brought in a New Wave of Punk with ‘Just Friends.’

The Plymouth UK indie punk-rock trio, The Horizons, single-handedly brought in a new wave of punk with their latest hit, Just Friends. The sweeping choruses are as animating as Reel Big Fish’s cover of Take On Me, while nuances of 90s pop-punk bite away in the same vein as The Offspring’s Hit That in the backbeat. The frenzied grungy instrumentals are dusted with a sugar-coated post-punk snarl that immediately arrests you in the intro before they bring in the silky pop harmonies. Some bands need an entire LP or discography to establish their dynamism, not The Horizons.

Once the fear subsided that this wasn’t an incel-y track bemoaning the friend zone, the euphoria in the upbeat indie punk hit quickly became infectious. The hit becomes infinitely sweeter when you register the self-awareness that allows them to traverse around commitment issues while pertaining to a roguishly modern brand of romanticism.

Just Friends. was officially released on December 28th. Check it out on Spotify.

Drive By Cinema wrapped their hooks around toxic party culture in the 00s pop-punk hit, Drink On

In their own nihilistically hedonist words, “Drive By Cinema makes pop punk for when you want to party, but you also want to die”. On that basis alone, we adore the five-piece that is bringing back the sound of Fall Out Boy, Blink-182 and Hawthorne Heights with a modern twist.

While the lyrics cut you deep in Drink On, the choruses will wrap you up in their boisterous momentum before the verses melodically wind it back down to ensure every lyric makes maximum impact. The independent outfit might wear their heart on their sleeves but there’s plenty of room in the hit to brand their sonic signature through the contrasts in tempo, which encapsulate the rollercoaster life when you’re always chasing the highs, numbing the pain and crashing right back down with less serotonin than when you started.

Drink On will officially release just in time for New Year’s Eve revelry on December 30th. You might want to rethink your plans after hearing it. Spin it on Spotify.

dogbeach stuck it to the facade-preferring masses in his progressive melting pot of genre, Fake It

Traversing people’s proclivity to convince others to plaster a fake smile over valid emotions, the solo artist dogbeach (Bob Maschio) created a sardonically protestive hit out of his latest single, Fake It.

To stick it to the façade-preferring masses who wouldn’t know what hit them if a drop of empathy crawled between their synapses, dogbeach released a sun-soaked progressive alt-rock lament to their selfish ineptitude with compassion.

Switching between post-hardcore vocals and melodic pop choruses and playing with punk and alt-90s pop tones, he efficaciously encompassed the bemused rage that comes to fruition in the face of the audacity that adds to the stigma around mental health.

It is a sure-fire hit of vindication for anyone that knows the frustration of other people’s expectations. The playful reprise of “why would I do anything for you” hits the nail on the head with satisfying precision.

Stream Fake It on Spotify now.

After a brush with disorientating heartbreak, the Toronto-born, LA-based artist, producer, and dancer Juliette Irons picked herself up, dusted herself off and released the stormer of a pop-punk anthem, Skydive, as an act of solidarity with anyone feeling the same anxious dejection.

Skydive follows on from her evocative whirlwind, Prisoner of My Mind, which introduced the airwaves to the claustrophobia of anxiety. Still on stellar lyrical form, Skydive ensnaringly traverses the euphoric highs and dark and despondent lows of a situation-ship to prove even if you’re the one broken and bruised, you’re not the loser.

No heartbreak can survive the flood of dopamine that surges from Skydive. The rap verses are the vindicating cherry on the hook-sprinkled pop-punk cake, which tastes like 00s nostalgia, but Juliette Irons always brings her own signature emboldening flavour to the mix.

“Skydive was inspired by the confusion that comes from whirlwind heartbreak. I had just come out of a brief rollercoaster situation-ship that ended abruptly without much explanation. I felt like I had been thrown from a moving plane, woke up on the ground, and I was the only one who jumped.

I had given everything to this person, only to end up a shell of myself as I picked up the pieces during a realisation that everything was over. I hope this song can help other people going through a similar ungrounding shock to the system, and we can be empowered through it together.”

The official music video for Skydive will officially premiere on November 18th. Catch it on YouTube, and stay tuned on Facebook & Instagram, as Skydive is only the first part of the story. The concluding chapter will be told through her follow-up single, The Fear of Flying.

The Outside Kids call for salvation in their grungy pop-punk visceral earworm, Hey God

With their Sub Pop record deal-worthy dynamic edge, The Outside Kids made us suckers for their cutting-edge nostalgic kicks through the lead single, Hey God, from their debut LP, Dirty Faces.

By implanting Green Day-style pop-punk hooks and a little RHCP melodicism in the 90s Seattle sound, the alt-rock duo found the perfect formula for earwormy infectious appeal in the contemporary rock scene. Sparked by a shared influence of Against Me! and Frank Turner, the duo’s symbiotically tight propensities entwine with their socially conscious edge to make their sound that little bit more soulfully gripping. The original icons of pop-punk got plenty right, but with evasive morality, the records will always resonate as bitterly juvenile; The Outside Kids brought the maturity the scene has always been deprived of.

The loud reprise of “can you hear me now” paired with the title of Hey God is a powerful allusion to the frustration we all feel when we forget that the world isn’t happening to us, we just happen to be here for the ride. Embrace the chaos with this perfect hit.

Hey God is now available to stream on Spotify with the rest of The Outside Kids’ album, Dirty Faces.

Buzzkills be damned in Nothing but a Nightmare’s post-pop-punk single, She Always Ruins a Good Time

The Philly-based alt-rock innovators, Nothing but a Nightmare notably sharpened their pop-punk hooks for their third studio album, The Salvation, which features the playfully protestive single, She Always Ruins a Good Time. If any single could take down the boss-level Karens out there that seem to be becoming increasingly prolific, it’s this riotous earworm, which comes complete with frenetically witty verses and choruses that will absolutely consume you in their euphoric pit-worthy energy.

With hints of Fallout Boy and Panic at the Disco woven into the sticky-sweet 00-Esque tapestry, Nothing but a Nightmare delivered a smorgasbord of modernised nostalgia that proves that there’s never any really growing out of an emo phase.

The Salvation officially released on October 14th across all major platforms; check it out here. 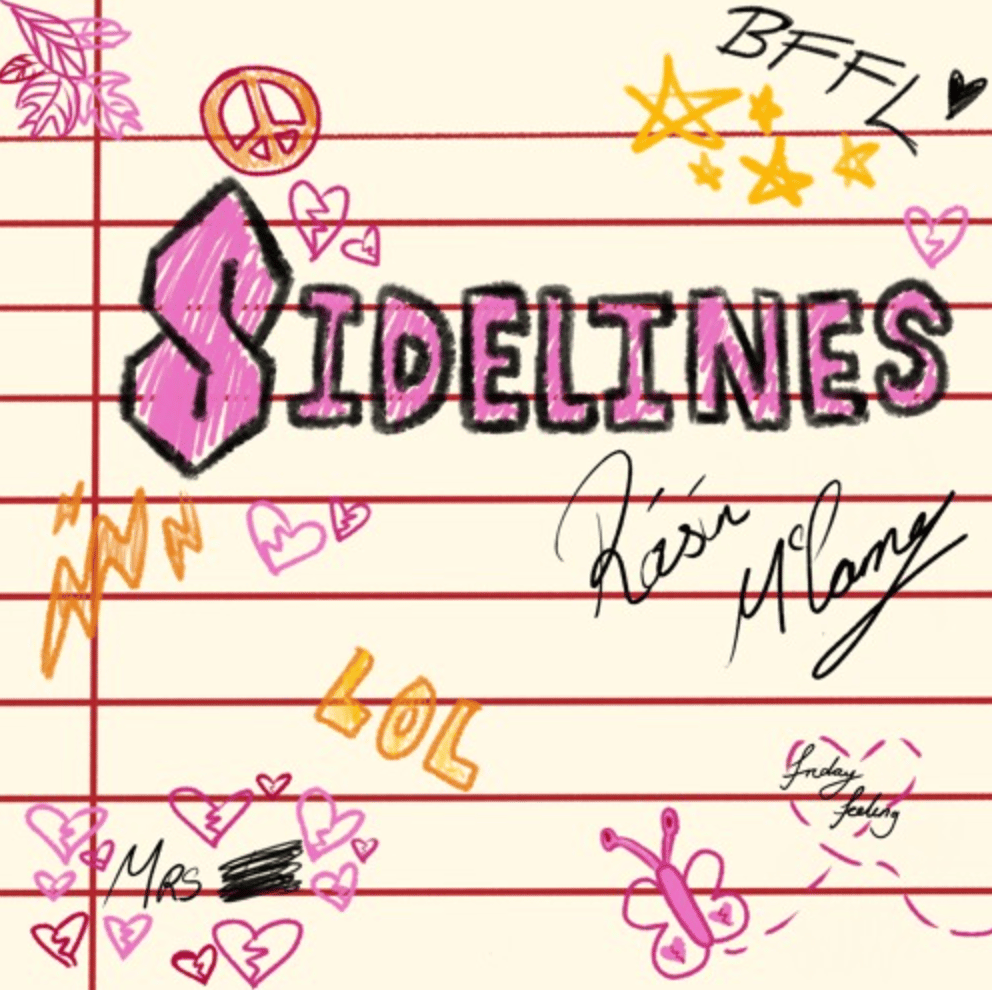 Stylistically, we got plenty wrong in the 00s, but it was a golden era of pop & pop punk with Avril Lavigne, Miley Cyrus and Olivia Rodrigo being the soundtrack to our angsty lows and euphoric highs; up and coming artist, Róisín McCarney took us right back there with her nostalgic noughties pop hit, Sidelines.

The Scottish singer-songwriter has broken away from the dance genre to make the best use of her honeyed fiery vocals by creating a vindicating heartbreak anthem that serves as a reminder that the only one that can pull you in from the sidelines is you.

After finishing her cancer treatment, Róisín McCarney knows better than most how precious life is when it isn’t a given. Written between the lines is a request for people to dance their heartbreak away; luckily enough, you have the perfect anthem to do it with. The bouncy pop-rock guitars against her vocal lines that could give Pink a run for her money create a sure-fire serotonin hit.

Sidelines will officially release on October 14th. Hear it on Spotify and follow the rising pop icon on Instagram and TikTok.

Post-emo pop-punk outfit, Less Miserable took expression to the next level in their 2022 standout single, The Dentist. The visceral track explores the intricacies of depression by making a series of proclamations that everyone who has ever felt inadequacy loom along with the bark of the black dog will relate to.

With killer lines “the sun on my face feels like a cheap insult that I can’t ignore” and the chorus hook “If you want me to see a dentist, you’ll have to kick me in the teeth, I can’t ask for help unless it is an emergency” to a backdrop of progressively off-kilter post-hardcore rancour, The Dentist will break your heart through resonance. Before mending it through the affirmation that you’re not alone in the insecurities you feel in loving relationships and the tendency to neglect self-care when you don’t see yourself as something worth investing in

Without a hint of hyperbole, I’ve just found a new favourite artist in the Alberta-based outfit who specialises in self-deprecating anthems made to drink cheap beer to and shout along to in sweaty basements. It’s almost enough to make me buy a plane ticket to Calgary to party with the candour-gifted lyrical visionaries.

The Dentist is now available to stream and purchase via Bandcamp.