We’re always on the lookout for breaking bands who bring brand-new energy to Rock. And District 13 certainly didn’t disappoint with their transfixingly dark, evocatively visceral offering of Alt Rock “Soma”.

The instrumentals may be heavy, but there’s a striking amount of melodicism to ingest as the progressive hit unravels. Each new evolution in sound leaves you with yet another affirmation of District 13’s talent when it comes to fusing elements of Punk and Heavy Metal. You get the snappy riotous energy of Punk, orgasmically sweet guitar riffs, and harsh heavy tones all wrapped up in one sublime aural package.

That’s all without mentioning the vocals. If Jesus himself wept, it wouldn’t be as emotive as what guitarist and vocalist Jon Hartz Wild brought to Soma. The guttural drawn-out jagged whiskey-soaked screams will stay with me quite some time. But despite all of the raw emotion forcibly thrown into Soma, there was still plenty of upbeat energy to ensure that the track comes to a close without leaving you feeling like you’ve been put into an existential hole.

I’d be willing to put money on the London-based trio’s taking the scene by storm in 2020.

You can check out the official music video to District 13’s latest single Soma via YouTube.

NYC-based Alt Rock artist Forest Hills dropped an unmissable hit in 2019. If any fans of Gothically alchemic Alt Rock missed it, you’ll thank us later for the introduction to their standout single “Introvert”.

The fuzzy distorted chugging riffs provide the perfect contrast between front-man Zero Surico’s soaring vocals allowing you to appreciate them in all their soaring evocative glory. With subtle hints of Pop and Punk infused into the vocals in Introvert, you’re treated to powerful harmonics which come with plenty of ferocious bite.

Forest Hills are clearly an act who boldly set out to carve out their own sound. And they’ve definitely achieved that with Introvert which resonates as though you’re drinking in pure unbridled emotion.

You can check out the official music video to Forest Hills’ single Introvert via YouTube. 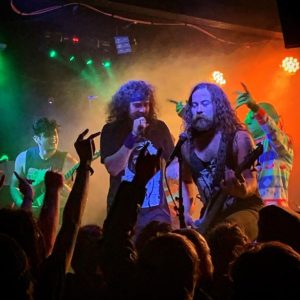 G2P is a three-piece act from Tampa, Florida and you can bet that the sound they’re bringing is as sunny as their homeland. “The Sound” is a snappy funk-metal song that is bound to delight listeners that are into RCHP, Primus & Faith No More (obviously). The drumming is vigorous yet concrete; the electric guitar’s sound is palatable and brings the heat with the song’s main riff. The bass is all-around slashing and serves as the main groove provider. Regardless, I think it is the vocals that take the cake. The listener who is either way into this sound will easily perceive an immediate influence from Mike Patton – which let’s be clear, 99 out of 100 times is nothing less than complementary to a musician.

You ought to let G2P funk you up; check out “The Sound” here

Canadian Alt Rock newcomers Fate Will Come have made their debut with the fiery hit “Wreck”. By blending elements of Metal, they gave the punchy raucous track plenty of bite without compromising on the instant rhythmic Rock hooks.

Singer-Songwriter Renita Ann Zintel provides all of the lyrical and vocal conviction needed to make Wreck resonate from the first time you press play. There’s plenty of nostalgia to soak up through her influences such as Heart and Janis Joplin. While Matt Krischner brought his dynamic signature guitar licks heavily influenced by Dave Mustaine and Zakk Wilde.

It’s catchy, it’s energetic, and it’s a great indicator of good things to come from Fate Will Come in 2020.

You can check out Wreck for yourselves by heading over to SoundCloud now.

Six Feet To Salvation’s standout single “Wait for Time” from their debut album “City of Churches” is vicious enough to take the bite out of your favourite Hard Rock artist’s tracks. Pearl Jam may as well be in the same league as Taylor Swift once you get a taste of the caustic energy which lies in this progressive feat of Alt Rock.

From semi-orchestral melodic verses to grungy mesmerism, to high-octane visceral choruses Wait for Time carries an arsenal of tricks to melt your mind and appease your angsty soul.

City of Churches is an unforgettable debut, we can’t help but anticipate good things to come from Six Feet To Salvation in 2020.

You can check out Six Feet To Salvation’s single Wait for Time along with the rest of their album by heading over to Spotify now.

With each new release from HAWXX, I’m left with the pressure of trying to allude to arcane nature of their sound. Their latest release “E.” is definitely no exception. For the fourth time in a row, they’ve blessed us with yet another thunderously ethereal Rock earworm.

Their music is so much more than just a testament of talent – which they perceptibly have. There’s a captivatingly cathartic air behind each new release which allows it to feel soulful, spiritual, almost celestial.

E. kicks off with a stark demonstration of nuanced vocal power while still treating the listener to a soft and melodic rendition of the empowering lyrics. The extended length of the single gives plenty of room for winding synergetic instrumental progressions which tease the epic breakdowns which you’ve come to expect from HAWXX. When it finally happens, every cell in your body will acknowledge it.

2019 has been a big year for HAWXX, but I have a feeling 2020 will make it seem like they barely even started.

You can check out HAWXX’s latest single E. for yourselves via Spotify.

Head over to their Facebook page to keep up to date with new releases and tour dates – if you get a chance to see them live don’t sleep on it.

If you haven’t had your synapses rattled by Florida-based Thrash powerhouse Thicket’s standout single “Isolation” yet, it’s our pleasure to introduce the progressively fierce aural monster.

With an old school Punk angsty bite in the vocals and an instrumental arrangement which finds the perfect momentum through a combination of Speed and Thrash Metal, Isolation isn’t a track which needs to strive for ostentatious pioneering power moves to set itself apart with distinction. Instead, through the subtle authenticities, and the striking nuance in their high-octane tight sound, they’ve proven themselves to be one of the most exciting Thrash bands around right now. It will be a while before we forget the potency of the pure venom poured into the lyrics.

You can check out Thicket’s single Isolation for yourselves by heading over to YouTube now.

Up and coming Connecticut Hard Rock artist Little Us has recently released their latest melodically captivating single “Something Real”. If you ever wondered what nuanced Hard Rock blended with atmospherically chilling synths sounds like, listening to Something Real is probably the best way to get a taste of that unique alchemy.

While the good majority of Rock bands make the mistake of trying to make the biggest or loudest sound, Little Us constantly switch up the melodies in Something Real, making each new progression as arrestive as the last. Throughout Something Real you’ll still be treated to thunderous drum rolls and searing technical guitar riffs, but there’s also plenty of cutting laid-back increments to make sure your rhythmic pulses are well and truly at the mercy of the soundscape.

It wouldn’t be a stretch to say that Something Real is the most innovative Hard Rock single I’ve heard this year. There, I said it. Given the pioneering intricacy of Something Real, it’s far from hyperbole.

You can check out the official video to Little Us’ latest single Something Real by heading over to YouTube.