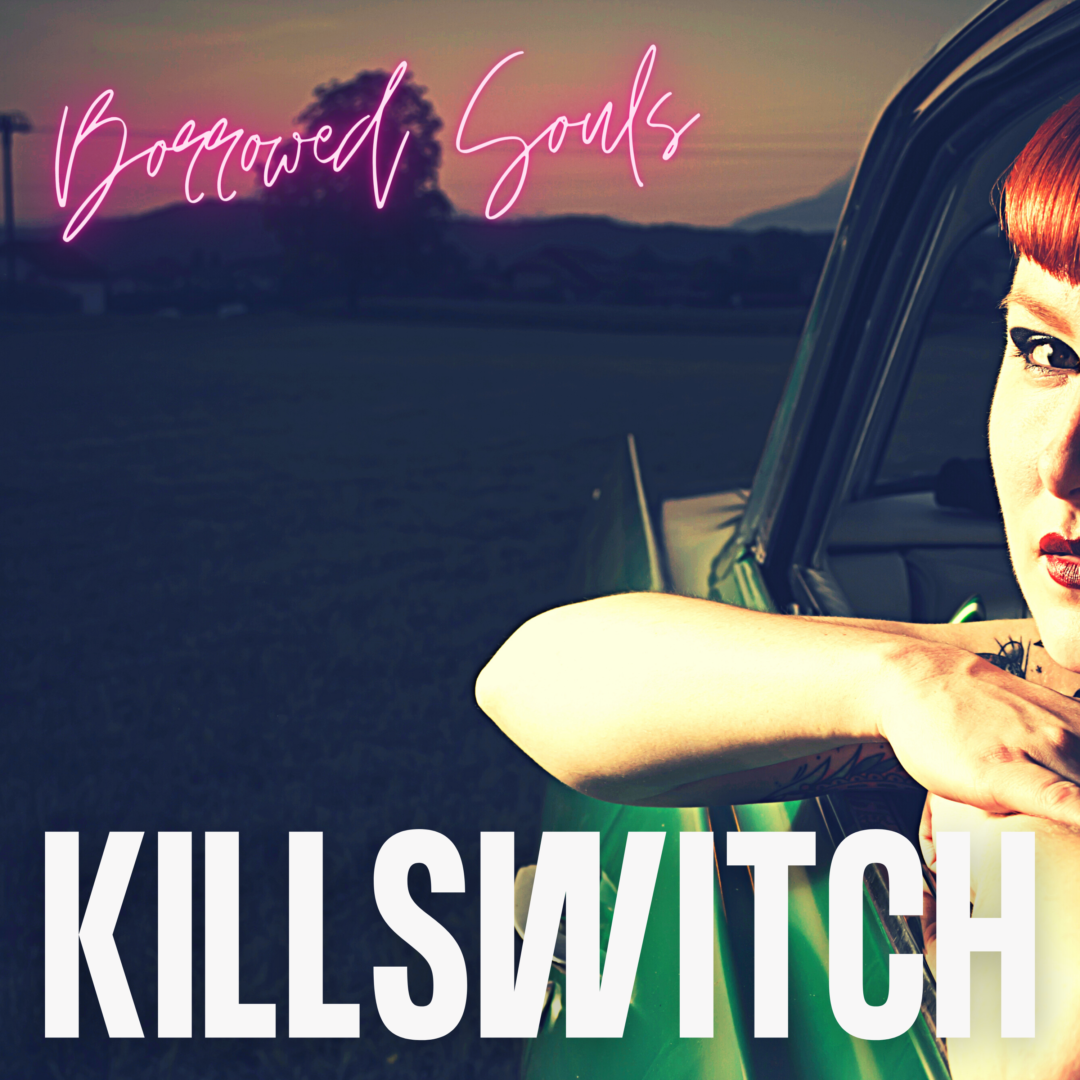 Borrowed Souls started out life, in 2016, as a covers band taking in the likes of Portishead, The Black Keys, and Alabama Shakes. As sometimes happens when a musical chemistry is formed between members, they realised they’d got something between them, and started writing their own original material. Finding their own, signature sound – a lo-fi mixture of jazzy, soulful blues-rock – the trio put together their debut EP, ‘Baxter’s Kitchen’, following up now with their debut full-length album, ‘Epiphany and Revelation’, ‘from which Killswitch’ – their debut ‘proper’ single release – is taken.

‘Killswitch’, then, is exactly that – bluesy, soulful, rocky, chilled yet powerful; opening up with some delicate guitar arpeggios, ‘Killswitch’ sounds exactly like something from the Sons Of Anarchy or Strike Back soundtracks, that gruff, vaguely Americana-tinged rock in the vein of The Forest Rangers, Billy Valentine, Mark Stone, or the Shapeshifters, but with a modern twist: Laid-back, groovy, swaggering alt-blues-rock – think ‘Short Change Hero’ by The Heavy, The Black Keys, or The Revivalists, and you’re not far wrong.

Americana-tinged modern folk is the order of the day from Dublin’s Bill E Daly with this, from his new EP ‘Parachute & Oxygen’. ‘Hey Baby Hey’ is a gentle acoustic-guitar-and-vocal love song with a catchy little chord progression and Daly’s deep baritone voice. Tinged with country and modern rock overtones, this is mature, well-polished, and accomplished, little guitar flourishes on the ends of lines interplaying with Daly’s chilled vocal delivery.

Daly’s previous album, 2017’s ‘There Is A Time’, charted at number 2 in Google Play’s ‘Folk’ category, and there’s every chance that ‘Parachute & Oxygen’ will do similarly well. ‘Hey Baby Hey’ is the ideal introduction to Bill E Daly’s music.

Kicking off with a beautifully delayed, ethereal guitar line before drums, overdriven sweeping guitar chords, and Tom Farrelly’s deep, sonorous vocals join in, THIRD LUNG’s ‘Falling Stone’ is a well-written, mature piece of stadium-style rock, reminiscent of U2 or maybe Simple Minds, the Foo Fighters, or perhaps a little Coldplay. There’s everything here; delicate verses, a huge, singalong chorus, and a proper, lighters-aloft, show-ending crescendo of a middle eight. It’s a proper, grown-up rock song, well performed, well produced, and with an absolute cracker of a YouTube video to accompany it.

‘Falling Stone’ is an exploration of self-discovery, about being afraid to make changes and to look for things which, intrinsically, we need to find. On the basis of this, a lot more people will be finding THIRD LUNG in 2021.

Sail away with the nostalgically lush tones in the standout release, “Preacher’s Daughter”, from Killarney, Ireland-based artist Colm O’Mahony & The Hot Touches.

Preacher’s Daughter is just one of the singles which features on the band’s debut album which borrows some stylistic elements from across the pond while keeping the folkish tones of Ireland still ringing in the euphoric aural pipe dream. The dreamy hazy melodicism combined with the soul-awakening vocal vibrato proves to be a powerful combination which will be a hit with any fans of Springsteen and the Heart Breakers.

You can check out Preacher’s Daughter for yourselves by heading over to SoundCloud.

Desert Shade: “All For Nothing” – Classic Americana of the very best kind

Bringing the Classic Rock all the way from Annapolis, Maryland, comes Desert Shade. Describing themselves as ‘born out of necessity in the fall of 2019 to fulfil a headlining slot’, the band came from a scrabbled first headline set to a show that landed them on the Baltimore Soundstage just a few months later. Now, following a couple of early singles, they’re bringing their brand of Americana-influenced classic rock via this, from their forthcoming self-titled debut EP.

Awash of laid-back harmonica and tweedy Fender twang, meandering bass, and graced by a beautiful heavily wah-and-distorted lead-line from Nick M, ‘All For Nothing’ is a cigarette-lighters-at-the-ready burner in the style of ‘Someday Never Comes’ of ‘Forever Young’.

Quietly forceful and evocative without being schmalzy, ‘All For Nothing’ smoulders like the best of laid-back Neil Young, the Allman Brothers, Tom Petty, or the Grateful Dead.

You can check it out here.

There’s an early Foos vibe to it, or maybe Queens Of The Stone Age if the Gin Blossoms’ Robin Wilson was singing lead vocals, but the overarching feel is a ‘Shame About Ray’-era Lemonheads. That’s no bad thing, it’s poppy without being throwaway, the vocal’s infectious and pushed to the fore, and the lyrics marry a certain world-weariness to the grungy guitar melody, but there’s some excellent musicianship going on too. This has got US-College Radio hit written all over it.

You can check out Black Hole here.

The anthemic energy of Exception is nicely paired with the intimately candid lyrics and vocals which invite you to aurally swim in the depths of the vocalist’s authentic and sincere expression.

With most Indie tracks, you can immediately guess who the artist is trying to assimilate. But Wild Sundays pull from a variety of sub-genres to deliver an overwhelmingly contemporary resounding sound which will appease Rock fans of all inclinations.

Whether you love to listen to Bon Jovi, Arctic Monkeys, Foo Fighters, or Manic Street Preachers, you’re sure to appreciate Exception.

You can check out Wild Sundays’ track Exception for yourselves by heading over to Bandcamp.

In American singer-songwriter Jon Davis’ rhythmically infectious, resonantly magnetic standout single “Someone Else’s Problem” there are sentiments we can all undoubtedly relate to.

There’s potentially no better feeling than getting rid of insidiously toxic people, and the rhythmically indulgent feat of Americana Rock n Roll perfectly captures that sensation of freedom and elation along with the bitter-sweet aftertaste of lament.

The single stands as a testament to the artist’s nuanced talent in orchestrating Americana Country Rock perennial earworms which are laced with connectable emotion. It feels quite criminal that Jon Davis has spent a significant amount of his musical career in tribute bands. Their natural ability when it comes to aural expression is not easily paralleled.

You can check out Jon Davis’ single Someone Else’s Problem for yourselves by heading over to YouTube.

If you could imagine an amalgamation of the atmospheric edge of the Chameleons and the anthemic appeal of Springsteen, you’d get a good idea of what is in store if you hit play on Rob Howe’s soulfully riff-driven Rock single “Promised Glory”.

The UK singer-songwriter and artist found the perfect balance between romanticism and high-octane Americana Rock energy in Promised Glory. Better yet, the distinction in the frill-free soundscape comes with no hindrance to the accessibility of the radio-ready track.

It’s safe to say you won’t hear a more infectiously rhythmic track produced this side of the 21st century if you turn on the radio today. We instantly warmed to Rob Howe, and we have no doubt that any fans of Americana Folk Rock will feel the same.

You can check out the lyric video to Promised Glory for yourselves by heading over to Vimeo.

Jerry Impini’s latest single “Not Involved” kicks off with a sonic blast of overdriven guitars which you may not be used to hearing in Americana Rock. But anyone who appreciates fresh new approaches to the genre will definitely want the Texas-based up and coming artist on their radar.

After hearing Jerry Impini’s Duelling Piano Rock track “Been Bad For Me”, we’ve learned that we can always expect attention-piquing ingenuity. Not Involved definitely didn’t disappoint. It’s animated, it’s fierce, and charisma drips from it.

Some of the guitar progressions may not be the cleanest, but the disorder in the track amplifies that raucously infectious Rock n Roll energy which will never go out of style.

You can check out Not Involved for yourselves by heading over to Bandcamp now.