The first single named after the EP, is a very soothing and calming piece of music, it’s always at such a slow pace and uses classical orchestration to light up the background. The vocal ranges go together in such a beautiful way, Thomas Powers comes in with his deep and soothing vocals and goes alongside Jordy Cheney who comes in with her high-pitched sweet vocals.

A clasp of the guitar strings, starting gentle then the strum begins to get louder. In each track the guitar really does stand out, it’s perfectly timed, it has this smooth tune to it. Plucking at the guitar strings, to strumming loudly on them when the vocals begin to get higher and the pitch is taken up a notch.

Sea of Fog have created a collection of Indie Folk songs that are so calming to listen to and really show just how good a guitar can really sound alongside some incredible vocal ranges.

Check out Sea of Fog’s The Wanderer and the Outcast, Michael Collins Observes the First Moonwalk from the Columbia Module and Child of the South by heading over to Spotify now.

The Boy from the South- Home Sweet Home and We Are All: Two pieces with two entirely diverse sounds

The Boy from the South recently released two new singles ‘’Home Sweet Home’’ and ‘’We Are All’’.  Each going in different directions of sound.

Home Sweet Home is one that is soothing to listen too, it all combines together in such a slow pace moving way. The vocals take that more mellow approach and has a rather gritty tone to them, as for the instrumentation at the start it begins with a travel announcement, quietly behind the vocals you can hear the sound of a train speeding along the tracks, it gives it this whole new meaning and feeling behind the story of going home.

We Are All is a Live Piano track, there’s so much power coming through in the vocals, so much more energy and feeling shining through. When something is live it gives it this completely different atmosphere as you can hear the artist for what they’re and it’s safe to say his vocal ranges are insane. The piano tune combined is so in tune and it all flows so well together. He has such an incredible voice to listen to and even live he still smashes it.

The Boy from the South surely knows how to sing, it’s intriguing to listen to how he adapts his voice to accentuate certain feelings and as a listener you can hear what words he wants to be heard more as the vocals get higher. We can’t wait to see what he has planned for the future.

Check out The Boy from the South’s new singles by heading over to Spotify now.

There will never be anything as beautiful as someone who has seen the dark bringing the light with their music. And that’s exactly what happened when Amigo the Devil graced Manchester with his amicably macabre approach to Folk.

Within the realms of Dark Folk, you’ll find plenty of dark and twisted lyricism. But Amigo the Devil (Danny Kiranos) goes beyond that. He digs up the storytelling roots of the genre and exposes the complexity of 21st-century sentience with the addition of humour which will touch even the staunchest of existentialists.

I hadn’t quite anticipated how emotional a live set would be. Yes, you can practically hear each drop as his soul pours out through his lyrics on his records. But seeing the stinging conviction behind each word amplified their veracious meaning in a way I could never have anticipated. Yet, every time I was moved to tears, I was forcibly shifted back to laughter with his quick humility-soaked wit.

The words “crowd participation” usually send shivers down my spine. Yet, with Amigo the Devil, it’s almost a knee-jerk reaction to get caught up in the experience and become part of it in solidarity with his candidly expressive bravery.

Given that there’s a fairly eclectic array of instrumentals on their recorded material, I was slightly dubious how he could recreate that live armed with just an acoustic or banjo. But his inventive request for the audience to help out with foot stamping and clapping percussion was infinitely more immersive than any backing band could have been. He’d instilled unity in the room quite early on in the set by reminding us that death is one of the only commonalities which we’re certain to share, that will probably only sound depressing if you’ve never been to an Amigo the Devil Show.

It’s all too evident why a cult-like fanbase surrounds him. I think I’ve been indoctrinated, and I couldn’t be happier. If you get a chance to see him live, take it. 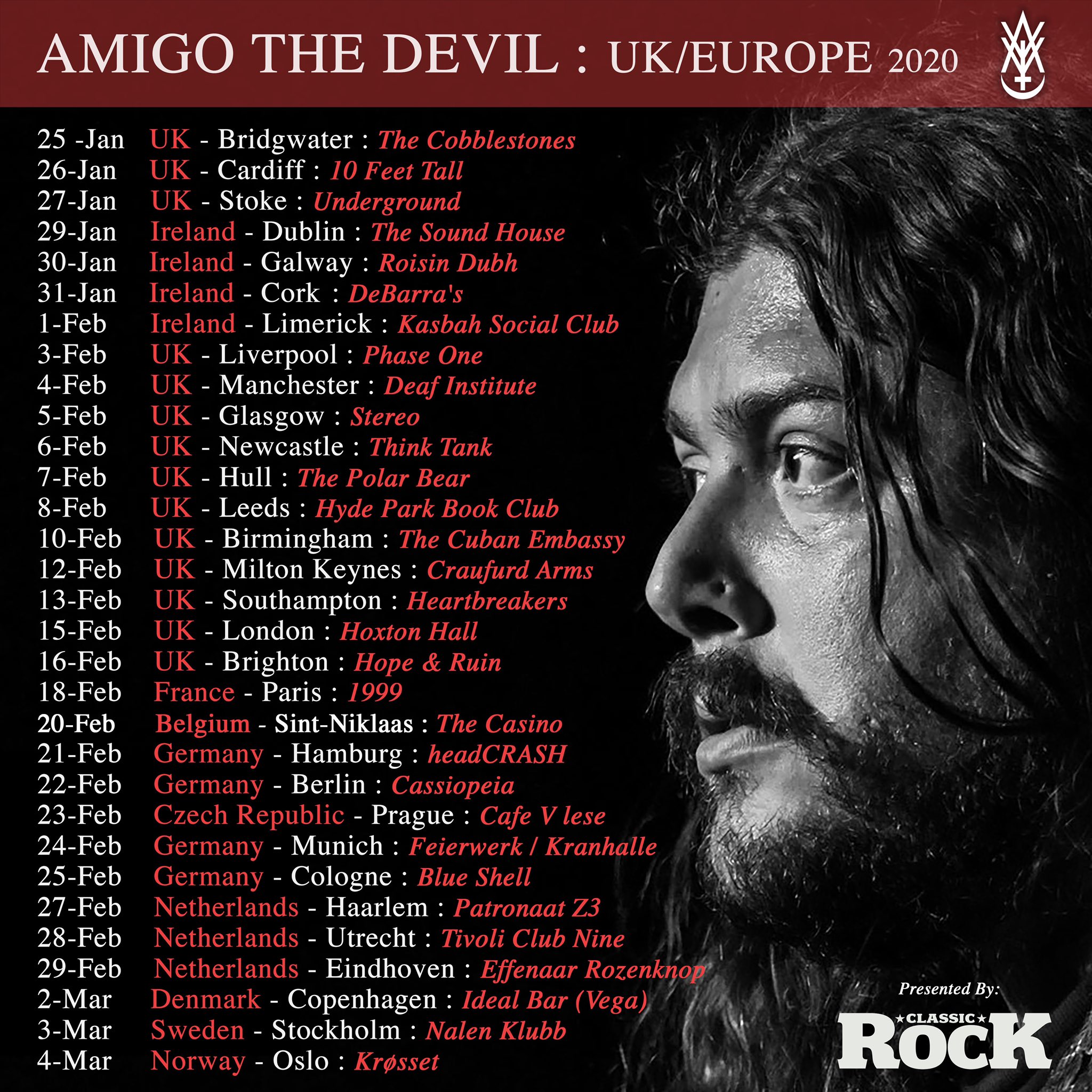 "REVOLUTION POSTPONED" Written and Performed by Joe Astley***** - UK Songwriting Contest "As soon as I saw the video and heard the song, I had to have Joe on the show" - Mike Sweeney, BBC Radio Manchester"Revolution Postponed dutifully explores the current state of the world." - Michael Hall, Radio WarringtonProduced by Gareth Nuttall - The Lounge Recording Studio📷 Video by Ryan Connor

With a debut album due to be released in 2020, there’s no better time to jump on the hype of the captivating sharpness found in Joe Astley’s nuanced Indie Folk Rock songwriting.

If anyone can be accurately referred to this generation’s Billy Bragg, it’s Joe Astley. It says a lot about the lack of societal progression that those lyrics could have been written 40 years ago. But the arrestive resonance in the aural mirror which is held up to our society could only have come from an artist writing in our 21st century bleakly unbalanced country.

With vocals which will crawl under your ribs and intensely rhythmic melodies, Revolution Postponed came together as a track which offered that rare unifying aural radicalism which we desperately need on the airwaves right now. Thankfully, I’m not the only one who appreciates the up and coming artist’s distinctive sound. He’s also been championed by BBC Radio Manchester’s Mike Sweeney, and Radio Warrington’s Michael Hall.

Morrissey may have let the North down, but Joe Astley is more than capable of picking up where he left off.

You can check Joe Astley’s performance of Revolution Postponed at the Lounge Recording Studio via Facebook. Or you can listen to the track via Spotify.

If Jack McKeever’s single “Here We Go Lifting” had been produced in the 70s, gained international acclaim and allowed plenty of time for nostalgic appeal to kick in, people would still be spinning the record today with the same enthusiasm they reserve for the likes of Leonard Cohen and Tom Waits.

Here We Go Lifting is a stark reminder that accolades are no indication of what a soundscape can offer. Jack McKeever’s ability to submerge you in the concordance of his unique aural creations is unparalleled. Through whiskey-soaked vocals and an ethereally light Indie Jazz-soaked Folk nuanced arrangement, Here We Go Lifting is captivating from start to finish.

There are also faint reminiscences of Nick Cave, Bowie and Elton John to be uncovered in the truly cathartic single. The warmth of the wistful tones will stay with you for long after the track has gently faded to a close.

You can check out Jack McKeever’s single for yourselves by heading over to SoundCloud now.

Taylor Paul – If There Was No Tomorrow: Serenely Reflective Indie Pop

We all tend to take time and our mortality for granted. Taylor Paul’s latest single “If There Was No Tomorrow” is a sweetly stark reminder to use our time a little more wisely.

While their virtuosic guitar skills aren’t the main focus in If There Was No Tomorrow, they make it all too easy to immerse yourself within the reflective serenity offered by the soundscape. It may be a relatively simple single, yet, tracks such as these will always be timelessly essential.

You can check out If There Was No Tomorrow which was released on December 24th for yourselves by heading over to YouTube.

Up and coming singer-songwriter Brayden George made their debut earlier this year with the single “Perfect Strangers”.  Any fans of acoustic folk-pop artists such as Ed Sheeran and Justin Bieber will definitely want to check it out.

The soundscape may be simplistic, but the sentiment definitely isn’t. Although there may be myriads of sticky sweet acoustic Pop love songs on the airwaves, it’s still refreshing to hear a new artist’s individualistic, honest, candid expression. As much as we loved perfect strangers, we’d love to hear Brayden George set themselves apart from the rest rather than aim to achieve the most accessible track as possible. They’ve got the talent, a touch of dynamism will go a long way.

You can check out Brayden George’s single Perfect Strangers by heading over to Spotify now.

Singer-songwriter Lucy Mayhew has recently released her latest feat of bluesy folk pop with the single “Where’s the Wisdom”. With the stripped-back instrumental arrangement, the absorbing lyrics hit you with an instantaneous resonance.

The powerful lyrics unravelled like meta poetry versed through Lucy Mayhew’s nuanced serene vocals which sat perfectly against the vibrant yet concordant melodies in Where’s the Wisdom.

The question in the track title is answered when you hit play on the intellectually-inspired single which aptly digs out the roots of our societal disparity before giving you a brand-new perspective to consider adopting. Aural salvation is needed now more than ever on the airwaves and Lucy Mayhew has proven that you don’t need to write angsty tracks to create an effective perspective-shifting protest song.

You can check out Lucy Mayhew’s latest single Where’s the Wisdom for yourselves by heading over to Spotify now.

Indie Electronica artist Oak Glen first appeared on our radar earlier this year with the sultry, moody Electronica single “Enemy”. Their most recent single “Killing You” played out on an acoustic guitar stands as a testament to both their talent as songwriters and to their versatility.

While most tracks played out on an acoustic guitar can leave you feeling painfully aware that you’re solely listening to a guitar, you’re far too captivated with the way the vocals gel against the deft woody guitar notes to notice. The vocals aren’t just dynamic in the notes they can easily stretch to, but also in the range of emotion which is offered as the pensively sweet single unfolds.

You can check out Oak Glen’s single for yourselves by heading over to Apple music.

Manchester-based Experimental Folk artist Sham Chewali released their latest single “The Non Believer” on November 1st. It’s safe to say that any fans of Billy Bragg are going to want to hear it.

The gentle melodies, the unsugared unmistakably Northern vocals (no one does melancholy better than us Northerners), and the image-conjuring lyrics all contribute to making the Non Believer a resonantly magnetic single.

And it is with their distinctive guitar work where Sham Chewali really sets themselves apart. The good majority of Folk music may lead you to believe that there are limitations when it comes to the chord progressions. But in The Non Believer, Chewali’s guitar offers intimately intricate rhythms along with sublime Bluesy finger-picked serenity.

You can check out Sham Chewali’s latest single The Non Believer for yourselves by heading over to Bandcamp now.