Under the Sun – Ocean Breeze: an ambient dreamwork of Lynchian cogitation

Posted on 11 January 2023
Ocean Breeze by Under The Sun

Adding a disarming new trajectory to the evolution of shoegaze, the Suffolk-based originator Under the Sun (Matt Catling) constructed an ambient dreamwork of Lynchian cogitation with their three-track release Ocean Breeze.

As hazy as the titular allusion, the opening title single carries the weight of driftwood as it traverses through the meditatively industrial layers of reprising synths and delay-filtered dreamy guitars. Mastered by none other than Simon Scott (Slowdive), Ocean Breeze is a scintillating adaption of the origins of ambient soundscapes, modernised through the essence of caustic 21st-century dystopia that leaks into the transcendence of the track.

The arrestive rhythms in Ocean Breeze are a testament to Under the Sun’s ability to create sonic worlds far more accommodating than the ones we’re physically bound to. Short of taking a trip to the 5th dimension, there’s no better escapism than the sanctity that flows just as mellifluously through the following singles, Whirlwind and Soft Focus.

With Whirlwind unravelling as a tribally psychonautic fever dream and Soft Focus exhibiting Branca-Esque tendencies enveloped by the bleeding lament of the vocals, it’s an evocative conclusion to a release you don’t realise how deeply you have enmeshed with until silence falls.

Stream Ocean Breeze on SoundCloud and Spotify, or purchase the release via Bandcamp.

Bleach Bath – Branches: The Only Sludge Pop Debut You Need To Year This Year

With the rhythm section dripping as much sex appeal as the most aphrodisiacal tracks on the Deftones’ White Pony album, the alt-90s oozing from the droning walls of shoegaze guitars that have been distorted out-of-kilter and the killer sludgy pop hooks, the debut single, Branches, from the Tennessee-based artist, Bleach Bath, is beyond promising.

The tinges of emo to the lyricism, which runs through the insecurities that every girl will have battled with at some age, ensured Bleach Bath came out with all vulnerable guns blazing. It is impossible not to get on a level with the singer-songwriter and band frontwoman who has been tearing up stages across Tennessee, priming herself to make an unforgettable debut.

Branches was officially released on December 2nd. Check it out on Spotify. 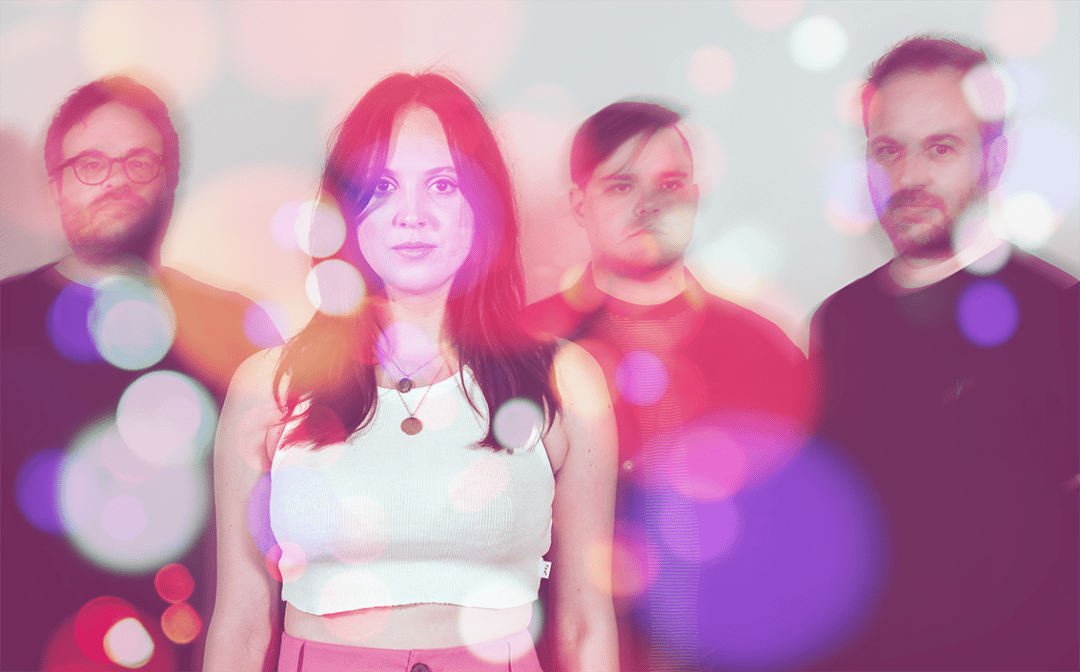 Pull yourself away from your Souvlaki, Loveless and Whirlpool albums and sink into the sublime reverb-drenched alchemy in the Minneapolis Dream Pop powerhouse, Lumari’s latest single, Neon Mirror.

With just a touch more intensity in the droning guitars that cradle the ethereally demure soul in Margo Pearson’s vocals which caress you on a multi-sensory level, Lumari achieved what so few shoegaze revivalists manage in this beguile-some release. They stayed true to the originator’s sound while throwing in plenty of their own post-modern flavour.

With touches of I Wanna Be Adored in the downward spirals of pulsating rhythm, there’s nostalgia to be here for sure; there’s also an unpredictability to the structuring of the inexplicably gripping release that stands testament to their songwriting and instrumental prowess.

Prior to founding Lumari, the founding members, Dave and Dan West could be found in the punk scene, opening for Green Day, NOFX and the Offspring. Once their tastes matured into an affinity for post-modern rock and Britpop, they teamed up with shoegaze lover Robert Caple and producer Eric Olson before completing the outfit with Margo Pearson.

Neon Mirror will officially release on November 11th. Hear it on Spotify.

October 14th, 2022, was a good day for shoegaze fans with the launch of the debut EP, transmit a little heaven, from the Belfast-based shoegazers Virgins. The up-and-coming trailblazers preach from the Smashing Pumpkins school of riffy ethereal dream pop, with colourful nods to Ride and the swirling choral textures of MBV.

In the title single, the crafters of sonic spectres simultaneously stayed true to the golden era of shoegaze with the signature lush reverb-wrapped walls of guitars and stayed true to their own authenticity through the cuttingly angular synaesthesia-inducing tonal hues that redact any hint of assimilation. The effortlessly outreaching vocals of Rebecca Dow that sting with emotion keep the lexicon clear just above the hazy euphonic guitars from Michael Smyth. The aural chemistry is more than palpable.

Burrow exposed the fear masquerading as perfectionism in his shoegazey indie debut, Spiral

Boorloo/Perth-based musician Drew Kendell has broken away from the hardcore scene to reign melodiously supreme under the moniker Burrow in the indie rock arena. His debut single, Spiral, is an achingly intimate serenade which consumes you with the same sense of soul as The National while playing with shoegaze-y distortion and cutting post-punk tones.

Spiral acts as a grippingly honest and revelationary exposition on the fear that masquerades as perfectionist behaviour. Between the lines and the shimmering reverb, it is a reminder to connect with our inner child and an acknowledgement that being human is a process.

As someone who constantly turns to Slowdive and My Bloody Valentine for catharsis, my shoegaze bar is set pretty high; Spiral still took me to a new plateau of appreciation for the stirringly sweet innovation effortlessly exuded by Burrow.

The official music video for Spiral will officially release on October 7th. Check it out on YouTube.

Taken from his first full-length album, Robert Jameson’s seminal dream pop single, Stay Awhile, is sure to appease any fans of My Bloody Valentine and Slowdive. But this colourful burst of sonic bliss, which comes with psychedelic hints of The Zombies, takes a slightly jazzier trip back to the alt-90s.

The signature bleeding vocals are there, but the cosmic pop factor is heightened in the complex time signatures of the warm synths and jazzy piano keys. His composition skills that allow the layers to envelop you in all of their kaleidoscopic magnetism certainly make it easy to Stay Awhile. Rarely do I hear a lead single and feel inclined to indulge in the album from a previously unknown artist, but Robert Jameson’s affable innovation makes it all too tempting.

Stay Awhile was officially released on September 21st. Check out the visualiser on YouTube.

Kablamo traverses the otherworldly in their post-punk-y indie release, Unnatural

Kablamo self-proclaims their debut self-titled EP to be personal, genuine and, at times, indulgent; I can fully attest to the indulgence being universal once you slip into the seminal single, Unnatural.

Unnatural unravels through dreamy guitar melodies, glassy synths and ragged post-punk basslines beneath the dream pop vocals which mellifluously breeze through the sentimentally heartfelt release, which all too readily imparts the emotion. An evocative response to the kaleidoscopic colour of Unnatural is non-optional.

Any fans of Deerhunter, Beach House, Tame Impala and Wild Nothing will undoubtedly want to sink their teeth into this paradoxically ambiently striking release.

The debut self-titled EP hit the airwaves on September 9th. You can hear it for yourselves by heading over to Spotify.

Taken from their debut EP, Open, the Milk Bar Gang’s standout single, Ozzie Ostriches Dream, is an ethereal lullaby; constructed to subdue you into an art-pop trance.

Any fans of Nico, PJ Harvey and Suicide will find just as much to favour in Ozzie Ostriches Dream, which wears influence from the 80s new wave, shoegaze, and cosmic pop as motifs affixed to the sheer originality that has been soporifically poured into this feat of transcendent avant-garde alchemy.

The reverb on the whispered vocals, the ring of the delayed guitars and the glassy aesthetic of the track all contribute to the intricately distinctive appeal that is sure to see the duo go far in 2022 and beyond.

Ozzie Ostriches Dream is now available to stream and purchase on Bandcamp.

Following the saturated-in-tape-delay indie dream pop intro, Lemonade Sin’s latest single, Melanie Nods, unfolds as a transcendentally playful aural crumble of the definitive UK sounds from the 80s to the 00s. The hazy shoegaze textures, chilling nods to post-punk and the Manic Street Preaches-Esque riffs in the middle eight pull together to form a sonic trajectory that you will want to follow time and time again.

With vocal reminiscences to Joy Division’s Atmosphere and the Human League’s Mirror Man happening simultaneously, Lemonade Sin is for every 80s fan out there looking for artists innovative enough to pull new aesthetics out of the synths, unmistakable percussion, and vocal layering.

Melanie Nods is now available to stream and purchase on Bandcamp.