Iris Brickfield’s ‘Cherries’ is some of the sweetest synth-rock we’ve sampled in 2022. The Newcastle upon Tyne duo run their dreamy indie pop vocals over the lush sweeping synths and honeyed choral guitar lines to create an 80s ethereal atmosphere that comes with a contemporary Adrianne Lenker-Esque kick and swirling reminiscence to Pale Saints.

It comes as no surprise that Iris Brickfield has been selling out venues on their home turf after gaining over 10k streams with their debut EP, Hold on My Lovers, which was released in 2021. They melodically toe the line between nostalgia and trend-carving innovation with gracious gravitas scarcely seen in the indie scene.

Cherries is now available to stream on Spotify.

Sam Scherdel versed from the ashes of a quick-to-burn romance in his indie anthem, Brave Mistake

There was no forgetting Sam Scherdel after he emerged as one of the hottest indie acts out of Sheffield since Arctic Monkeys with his single, Don’t Really Like You. His loved-up anthem has been followed by his vulnerably bold single, Brave Mistake.

The titularly dualistic track opens itself up to a world of ambiguity, but all of that resolves through the lyrics that allude to the termination of a relationship where love lingers despite the toxicity that breeds within the dynamic.

It’s enough to reduce the majority of post-breakup tracks to immature clichés through the soul-deep bitter-sweet reflection that is relayed to anthemic guitars and emotionally distilled keys that hammer home the melancholy as Scherdel reflects on the fleeting beauty of a quick-to-burn romance. The die-hard romantics out there are going to feel their hearts in their throats to this emotionally charged hit that will imprint the seemingly innocuous reprising probe of “how the devil you doing?” across your mind.

We couldn’t be more stoked to hear that a 2023 album is in the pipeline.

Brave Mistake was officially released on October 14th. Hear it on Spotify.

With the dark romanticism of the lyrics that will stir the soul of any Wordsworth, and Lord Bryon fans, Dvrk Romantics stayed true to their moniker while sonically blowing the competition with their cinematic blockbuster of an X-Rated single, Trouble Won’t Wait.

Rachel Di Biaso’s glam rock meets pop femme fatale pop energy across the raunchy guitar licks and snapping beats that drive the anthemic seduction right through the riot of siren-esque hit is a potent blend that will undoubtedly see Dvrk Romantics lauded as the best breakthrough act of 2022.

Seemingly, everything that Micky Waters turns to aural gold; after moving into this alchemic duo from being the bassist in The Answer, who supported Rolling Stones and ACDC, he’s going to manoeuvre those driving basslines right into the hearts of every glam rock, pop and indie lover alike. If you’ve always wanted to back a band before they become the next big thing, the time is NOW.

Trouble Won’t Wait was officially released on September 30th. Hear it on Spotify.

The transatlantic duo Post Suitcase unpack heartbreak in their debut single, Under This Hood

The debut single, Under This Hood, from the British/American indie-rockers Post Suitcase, euphonically bridges the transatlantic sonic gap. With blisters of Britpop bursting between the American overtones in the post-breakup track, it’s impossible not to get entwined in the narrative, which explores the tendency of others to put the token effort in when it comes to consoling and checking in on the recently heartbroken.

We’ve all been there, although notably, we’re not all capable of forging lyrical gold, “I’ll walk where the grass still grows, where my friends still smile but they really don’t know that, under this hood, is a lot of dead wood.” With the momentum ebbing and crescendoing through the release, which comes with the meditatively artful ease of the trumpet glossing over the angular indie guitars, Under This Hood is as cathartic as it is heartbreaking.

Debut releases don’t get much more promising than this. We’re hoping that Post Suitcase has more emotional intimacy and intellect to unpack in future releases.

Under This Hood will officially release on September 30th; catch it on SoundCloud.

The Relays sentimentally stargaze in their synthy alt-indie debut LP, Under Different Stars

After recording their debut album and mislaying the only copy for ten years, The Relays are finally here with their arrestive synth-driven LP, Under Different Stars.

With their previous releases, the Wigan, UK-hailing 4-piece have featured on BBC and Radio X, along with being lauded by Steve Lamacq and Huw Stevens. The title single from their debut album is a spacey testament to their swoonsome radio readiness.

While Under Different Stars lyrically latches onto a sense of sentimentalism that pulls you into the interstellar centre of affectionate gravity, somewhere along the way, the shimmering synth chords become entwined with your rhythmic pulses as you follow the melodic progressions through their absorbingly artful distinction. There’s no understating the evocative power of Under Different Stars, which effortlessly reaches above the standard for up and coming artists. It’s an achingly sweet release that will undoubtedly see the luminaries go far in their candour-heady career. Forget Editors’ new album, delve into this.

The debut album launched on September 29th; check it out on Spotify.

With an opening lyric as strong as “I don’t need to tattoo your name on my arm, you’re already under my skin”, we were immediately hooked on Red Wine Talk’s latest single, Anti-Romance, which aired after the 9-month hiatus they clearly used to mature their indie rock sound to the nth degree.

Far from your average boy meets girl cliché-fest, Anti-Romance affixes its lyrical lens on the wanton disregard with which we throw away the latest object of affection before searching for another; between the lines underpinning the irony of fawning over Hollywood and pop lyric romances.

I just hope that the cognitive dissonance of the quick sex aficionados out there can fully appreciate this reservedly poignant antithetic ode to love (or lack thereof) in our modern age. The instrumental minimalism truly stands as a testament to the power of the songwriting by this UK outfit headed by vocalist and guitarist Edward Brookes.

The official music video for Anti-Romance will premiere on September 9th. Catch it on Vimeo.

Green Wire launched their latest indie-rock attack ‘Upside Down, Inside Out’

“Upside Down, Inside Out” is the latest feat of era-spanning indie pop rock from the Manchester raconteurs of raucous innovation, Green Wire.

With notes of garage rock, pop punk and 80s rock fusing to create their dynamic sonic signature, Green Wire are by far one of the most authentic Manchester up-and-coming powerhouses as of late – a fact I can fully attest to as a fellow Mancunian. This high-powered frenetic earworm is sure to see the cheeky fourpiece go far.

Upside Down, Inside Out will officially release on September 2nd. Check it out via Spotify.

The Sunset Radio – Clouds: This One is for the Nyctophiles

Alt indie rock fourpiece, The Sunset Radio, returned from their three-year hiatus to release their stratospherically strident single, Clouds. The North Yorkshire-hailing outfit has moved away from their punk roots and ventured into spacey territory with their synth and sample-driven hit, which will go down a storm with any fans of The Midnight, The 1975 and Gunship.

The soul-baring lyrics may channel vulnerability, but sonically, Clouds stands as a testament to their ability to craft anthemically consuming choruses. If any up-and-coming UK indie act has what it takes to break it in 2022, it is The Sunset Radio. Tune in.

Clouds was officially released on August 26th. It is now available to stream on Spotify. 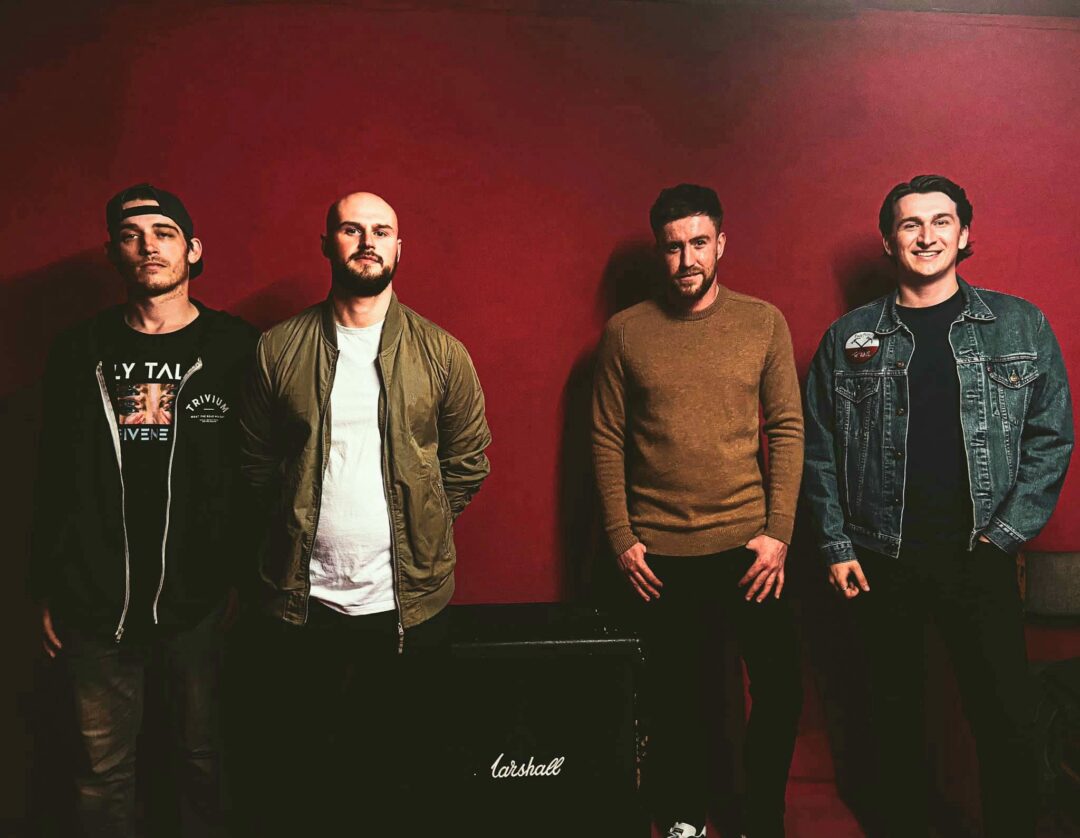 Since their 2019 debut, Backyard Casino has been lauded for bringing their infamous live energy to their boisterously relatable indie rock releases; their latest single, Silver Tongue, due for release on August 26th, is no exception.

The cagey post-punk-tinged hit comes complete with Pete Doherty-Esque swaggy vocals and popping angular indie guitar melodies that pull their weight when crafting the hooks that take the anthemic energy to the nth degree.

If any new up-and-coming act has what it takes to rock a main stage festival crowd with turbulence last seen in the 90s, it is this indie powerhouse with their sneeringly clever lyricism, loveably rogue vocals and tight instrumentals. Get them on your radar.

If you poured some sugar on Pavement or Dinosaur Jr, the result would be just as sweet as the latest single, they will have us, released by Horatio James.

With reflecting the human condition through lo-fi indie folk soundscapes as the motivation behind the singer-songwriter’s creativity, each new release is an opportunity to boost your mood and brighten your perspective. The dopamine streams are aided by the sweeping overdriven guitars, meltingly warm analog tones and his honeyed harmonies, which will teach you the meaning of expressive vulnerability.

The London-based artist is an all too refreshing taste breaker away from the superficiality that is prolific on the airwaves. For the same reason indie fans developed an affinity for the Violent Femmes and the Dandy Warhols, they will have us will leave an all too welcome synaptic imprint.

they will have us will officially release on August 5th. Check it out on SoundCloud.