Taken from their debut EP, Nobody Home, West Ridge Circle’s standout single, Stuck in This Chair, is an eclectic array of era-spanning rock nuances and modernist lyrical vulnerability.

Fans of Pavement, Pixies and Nirvana will want to drink up the 21st-century melancholy that drips through the lyrics and captures the frustration that lingers in unrelenting ennui. It’s tracks like Stuck in This Chair that prove there’s a beauty in collective misery, that now, we can hear lyrics, and it isn’t an Olympian stretch of the imagination to get on the same level. Granted, that isn’t always a given, but West Ridge Circle are thriving on the funk that is writhing through our existential hive minds.

With the J Mascis-style guitar chops, the despondent Americana blues-rock vocals that come with a tinge of the Seattle alt-90s sound and the eerily relatable lyrics, Stuck in This Chair has all the makings of a melancholy alt-rock playlist staple. We hope there’s another release nestled in the pipeline.

Stuck in This Chair is now available to stream on Spotify.

The alt-indie-folk-rock newcomers, Winternom, are set to bring souls in from the cold with the standout single, True, from their sophomore album, The Cold or the Crowd. Sonically, the hazily sweet single sits between Elliott Smith and Pavement, with a few proto-punk-meets-psych-pop nuances.

Lyrically, the Ottawa, Canada-hailing artist comes into their own with their witticisms that walk the line between existentialism and affection in a way that pays ode to the Alt 90s while still delivering emotive modernism. Despite its overarching lo-fi vibe, the dreamy textures in True never resonate as brash. Instead, they keep the tones bright to contrast the less than sunny, deeply relatable vocal disposition.

True is now available to stream along with the rest of Winternom’s triumph of an album, The Cold or the Crowd via Spotify.

djamesk13 has released his sludgy stargazing alt-indie hit, Then We See Our Stars

Then We See Our Stars is the latest lo-fi feat of alt-indie from the London-based experimentalist, djamesk13, which will instantly instil alt-90s nostalgia in any self-respecting no-wave fan.

The hooky grungy track may be too harsh and discordant to be everyone’s cup of tea, but for anyone who wants to revel in cathartic sludge fed through plenty of wobbly and echoey tape delay; Then We See Our Stars will hit the sludgy spot. Its Half-Man Half-Biscuit meets Pavement meets Swans. What more could you possibly ask for?

Then We See Our Stars is now available to stream via SoundCloud. 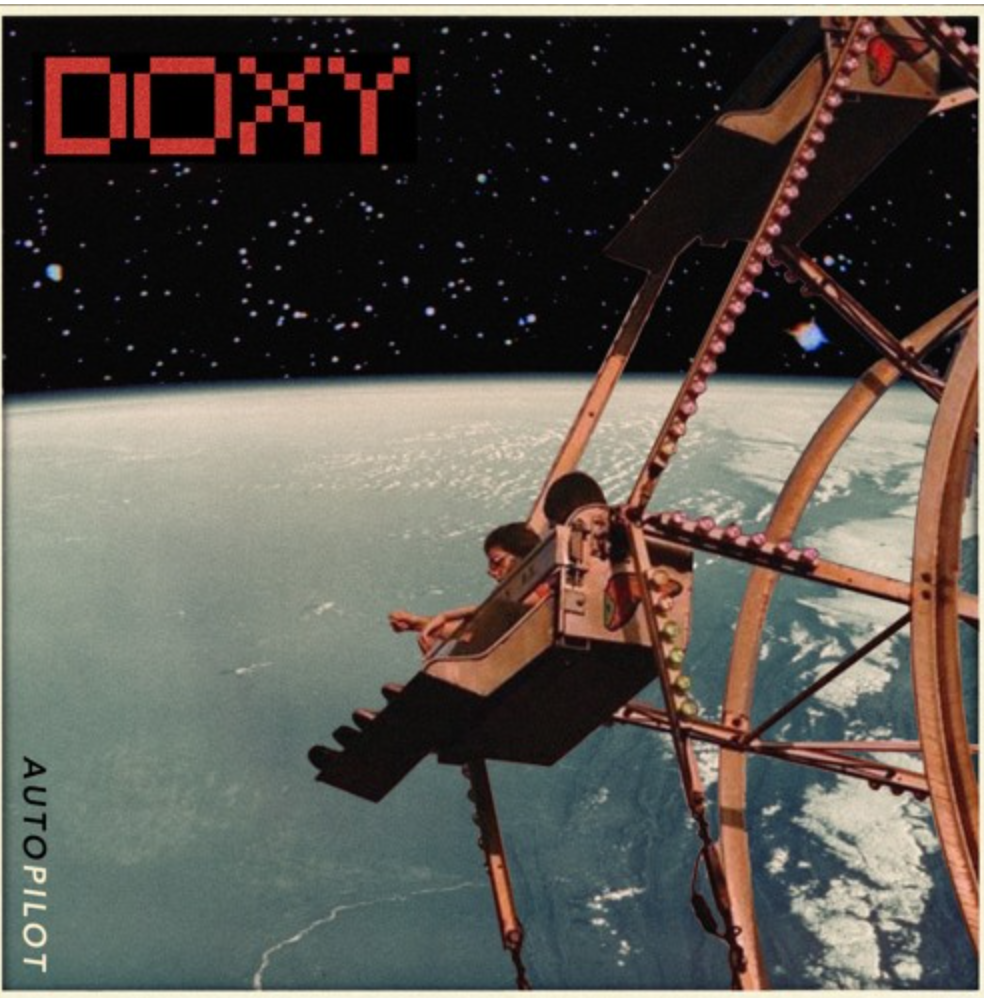 “Autopilot” is the latest jazzy avant-garde feat of lo-fi surfy punk rock from the LA duo Doxy. It’s a refreshing reprieve from the earnest tracks that force your subconscious into a state of lament; Doxy’s playful yet pessimist flair mixed with their ability to offer something that is truly euphoric and endearing, make them utterly infectious. Autopilot should be on every Pavement fan’s playlist. The angularly off-kilter guitar notes are just absorbing – if not more.

They poured plenty of the LA sun into the synthy jangly bop-worthy track. The discernible sweet spot hits when they declare a “freak out” interlude and follow with an absorbingly obscure breakdown which allows you to truly appreciate the jazzy nuances in this hazily blissful defiance against depersonalisation and detachment.

Check out Doxy on SoundCloud.

North Carolina’s most psychedelic retro surf outfit, Snatch the Snail, is set to release their warped and wavy alt-rock track, Sunk. Instead of sending you under as the track title suggests, the Avant-Garde nuances in the colourfully mellow track feed the dopamine with the same generosity of Pavement’s album, Brighten the Corners.

While the bent to the point of distortion guitar notes ring through plenty of wobbly echo and delay, the deadpan vocals sweeten the track that has all the hallmarks of a vibe-out playlist staple. With the experimentalism of Mike Patton and the punk surf vibes of Fidlar, it doesn’t take a genius why Snatch the Snail are thriving in their niche.

The standout single, Stander, is the perfect introduction to Rabbit Dream’s indulgently distorted tones, massive stadium-filling guitars that are just as robust as the licks in the National’s most anthemic tracks and the vocals that embed authenticity in the progressive single. Before the first instrumental buildup, the vocals are honeyed and sweet; after, they start to gather reminiscence to Julian Casablancas as the guitars dial up the frenetic energy. It isn’t your average indie rock earworm, but you’ll be more than inclined to return to it and give it repeat attention. Rabbit Dream is definitively one to watch; for your own sake as much as theirs.

Stander is now available to stream along with the rest of Rabbit Dream’s debut album via Spotify.

Fred Whitacre, JR’s latest indie grunge earworm, Less Smitten, acts as a TARDIS with one destination, the alt 90s. The over-driven distorted guitars eclipse the Seattle sound as Whitacre lends from heavier genres to ensure that the sticky-sweet melodies in Less Smitten hit with bruising impact.

If you could imagine the sweetly sentimental sound of Nada Surf, the disquiet chaos of Nirvana and the experimentalism of Pavement all rolled into one high-octane anthem where the buzzsaw riffs cut with a hint of pop-punk, you’ll get an idea of what is in store when you hit play. Quite honestly, I couldn’t be more infatuated with Less Smitten, which feels like quite the paradox, but it isn’t every day new grunge artists emerge with sludgy tones that lead to a spike of serotonin.

The official music video for Less Smitten is now available to stream via YouTube.

Alt 90s outfit, Selfish Gene made a comeback with their melancholically mellifluous single ‘After the Rain’

Decades may have passed since alt-rock outfit, Selfish Gene garnered rave reviews and joined Sonic Youth on their Washing Machine album tour in 1996, but the Tel Aviv-hailing artist’s despondently transfixing sound is just as transfixing in the 21st century.

‘After the Rain’ is the first single to be released from their forthcoming album, produced 20 years after the original line up disbanded. With vocals which carry reminiscence to Matthew Caws (Nada Surf) and J Mascis against distorted winding guitar hooks which may as well have been played on your heartstrings, the melancholically mellifluous single is as evocative as it is innovative. Anyone who can’t get enough of alt-90s indie may finally find themselves sated by this sweetly optimistic-in-spite-of-nihilism release.

After the Rain is available to stream via Spotify.

Shared Image Redefines Who Does What on their superb new single.

Soft, jangly indie-pop is overdone at times these days, but ‘Redefined’, the first single from Shared Image’s new album ‘Who Decides Who Does What?’, is a cut above the usual ‘three lads with Telecasters from Crewe’, with a charm and style all of its own.

Shared Image – hailing from Thunder Bay, Ontario, which is a little more exotic than Crewe for sure – have pretty much answered their own album-title question here – this is the brainchild of Craig Delin, a 20 year veteran of bands now forging his own path by writing, creating, performing, and producing ‘Who Decides Who Does What?’ all by himself. So it seems he decides pretty much who does everything, and on the basis of ‘Redefined’, that’s working to extremely good effect.

Vocals, guitars, keyboards, drums and programming, and synth parts are all down to Delin, the whole track sitting together beautifully; there are elements of old school alt-rock indie goodness in the likes of Pavement, a little of Johnny Marr’s guitar work and certainly some Modest Mouse, coupled with a little of They Might Be Giants and maybe a touch of Crowded House in the mix too. That’s a pretty heady mix, and on ‘Redefined’ it works extremely well. Based on this, Delin deciding Who Does What is a pretty sensible plan.

‘Who Decides Who Does What?’ is out now across all major streaming platforms. You can hear ‘Redefined’, and the rest of the album, on Spotify, and follow Shared Image on Facebook.

Cult Casual hit record stores on September 25th and affirmed that the optimism that I’ve held since hearing their eccentrically resolving sophomore single Battery Acid in 2019 was entirely well placed.

Some records, you put on the turntable and know you’ll be apathetic about letting the needle hit it again. Others, you know you’ll delve right back in for the successive hits of emotion which manifested the first time around. Cult Casual is firmly in the latter camp.

Track 1, Death is a gentle Surf Pop easing into the colourful chaos which ensues in the form of their cult hit (in the most literal use of the phrase) Battery Acid. Track 3, The Wish is the feat of feisty grunge which blows every other Garage Rock artist in Manchester out of the water while simultaneously giving artists such as Dinosaur Jr a run for their money.

Track 4, Inner Versions carries the same bite as The Wish, but this time the playful angst is projected over punchy Indie Rock licks, leaving plenty of space for guitarist Rob Glennie to humbly unveil the virtuosic talent he’s been hiding all along. Track 5, Reverse Snake is Heavy Salad’s psych Rock scathing attack on the ideocracy which led us to Brexit. Arcanely, they actually succeeded in creating a high-vibe Anti-Brexit track.

Fans of Avant-Garde will be suitably enraptured in the album from Track 6 where the experimentalism truly starts to take hold. After you’ve enjoyed all the juicy Psych Pop earworms, it’s time to immerse yourselves in the unpredictable yet pragmatic progressive nature of High Priestess and This Song is Not About Lizards. Unapologetically, the tracks take seismic shifts in tone and ferocity, leaving you at the mercy of their rhythmic prowess and whatever celestial magic the Priestesses are serving up in the form of their intoxicating vocals.

Whichever plateau you’ve floated to with the former singles, Routine Dream will allow you to crash down to earth with the scuzzily confrontational track which serves an aggressive yet compassionate reminder that you’re probably living blind. Thankfully, there’s plenty of aural comfort in Slow Ride which will make sure that you’re in the best possible mindset for the evocative assault which follows.

The final track It’s OK to Bleed will break my heart over and over again. In a time where people are more likely to invest in bitcoin rather than their emotional intelligence, it’s utterly priceless. Straight from the intro, the tenderness rings through the guitar progressions, then, the vocal and lyrical empathy bring torrid emotions to the front but there’s plenty of solace to be found in the track which unravels as gospel for the impious.

In short, it’s a cosmic rollercoaster and easily up there with the best things to happen in 2020. Listen to it.

You can check out Cult Casual via Spotify & Bandcamp or you can (and you definitely should) treat yourself to a CD or vinyl copy of the album released via Dripped in Gold Recordings.