Shredding the walls down one by one with a totally intoxicating ambiance that shall heighten all your inner senses out of any self-enforced slumber, Sound Animal ravages our previously-innocent ears with his latest track ‘Botulism Cafe‘.

”Botulism Cafe is Noise Metal. Dirty, farty grit to have fun kicking out walls with. Ballsy dissonance from an apartment bedroom.” ~ Sound Animal

There is a fiery explosion of blaring sounds from a truly possessed artist who is in the prime of his career – with the gusting winds of creativity roaring down on him – like a hungry Lion who needs a snack right now as his belly rumbles furiously. The ear-piercing energy is quite overwhelming at times, with a booming speaker-breaking force that is unlike anything heard so far in 2021.

‘Botulism Cafe‘ from the experimental dark doom California-based solo artist Sound Animal, is an almost eight minute experience that shall have your over-stimulated mind feeling rather enraptured with this whole experience. This is loud, brash and in your face, with no let ups for a breath at all. Exactly the way it was intended after all.

Hear this wild new track on Soundcloud and see more via the IG music page.

FEMUR – Misery Express: The lockdown-born No Wave track which perfectly emulates the proclivity of misery

Sheffield’s charismatically abrasive instigators of volatile Psychedelic No Wave, FEMUR, amped up the intensity and visceral fortitude of their sound with their latest release ‘Misery Express’, allowing me to finally experience something more disquieted than my own mind during lockdown 2.0.

With psychedelic melodicism acting as the glue which keeps the savagely caustic tapestry together, Misery Express pairs a tundra of rampantly thrashed over-driven guitars with creeping tones which allow you to sit in anticipation for the next monumental breakdown. It’s heavy enough to give the Berzerker a run for their money, all the while exuding an Avant-Garde noisy edge which has become synonymous with FEMUR’s sound.

The lockdown-born track perfectly emulates the proclivity of misery; the full-frontal scathing volition and those moments between where you’re able to catch a breath, but your mind is still dizzied by rage.

You can catch the official video on YouTube. Or you can listen via Spotify.

Keep up to date with the latest antics from FEMUR via Facebook.

Nashville, Tennessee artist jain released their noisy Garage Rock EP ‘the end of June’ at… the end of June. The track which caught our attention was the discord-spilling riotously angsty single ‘kneading’.

The short and distortedly sweet track incorporates elements of Punk, No Wave, Post Hardcore and Indie and throws in some sonically psychedelic lead guitar work to ensure that you’ve never heard anything quite like this eccentrically volatile release before.

In short, kneading is utter chaos and it can even make artists such as Pavement and Daughters seem middle-of-the-road.

You can check out kneading for yourselves by heading over to Bandcamp where you’ll be able to download and stream the rest of the EP.

But rather than assimilating Avant-Garde pioneers, 8udDha bl0od weaved in plenty of their own distinction through the use of bluesy, hazily psychedelic atmospheric tones.

The experimental Math Rock notes fall into just the right place to create a rhythmic pull which will lead you through the deftly crafted progressive soundscape. As the track progresses, the rhythms get tighter and tighter until you’re aware that your own rhythmic pulses have become arrested by the hypnotically cutting track.

“57rAng3r 7hing5 D0Wn5!D3 Up in the Up5!D3 D0Wn W0rlD” is just one of the most recent releases from Brighton-based Alt Rock 5-piece 8udDha bl0od. You won’t hear another more intensely immersive track on the radio today.

The production has an ambient, light, and dreamy melodic feel, yet, 57rAng3r 7hing5 D0Wn5!D3 Up in the Up5!D3 D0Wn W0rlD isn’t a track which you mindlessly slip into. The striking tones of the ethereal electronic effects and overdriven guitars will make sure every seamlessly unpredictable guitar progression has your full attention.

We often speak of tracks being magnetic, but this time, you almost feel as though you’re being pulled into a Lynchian dystopic aural black hole. Their ability to blend melancholy with transcendental energy is unparalleled.

Naturally, we can’t wait to hear the psychotropic wonders 8udDha bl0od have in the pipeline ready to drop in 2020.

On January 31st, 2020 Brexiters insipidly celebrated the prospect of monoculturalism. Meanwhile, I embraced the cultural diversity found in another stellar line up curated by Manchester-based promoter Astral Elevator.

With Noisy Italian Psych Post-Punks Kill Your Boyfriend headlining and support from Manchester’s Hey Bulldog and the Dee Vees along with Dublin’s finest Psych Garage Rock act Glossolalia, there was a sticky-sweet melange of Psych-driven noise to delve into.

Hey Bulldog’s socialist approach to Psych Blues Garage Rock left me mesmerised once more; their sound was as tight as the government’s welfare budget. The momentous tensile force behind their deftly orchestrated tracks paired with the disquiet delivery of the sniping lyrics will never fail to blow me away. 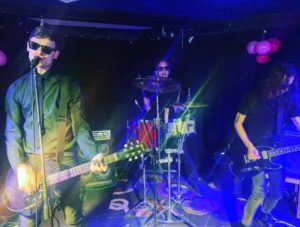 The caustic tones of Kill Your Boyfriend may be ringing in my ears some 24 hours later, but it’s a small price to pay for witnessing such an explosively entrancing set which matched the same decibel-intensity of Swans and My Bloody Valentine.

Their darkly despondent experimentalism finds the perfect balance between Noise, Shoegaze, and Post Punk to offer a level of distinction which aggressively resonates in every note delivered.

With their tribal drumbeats, inventively distorted angular guitar progressions and riotously-charged vocals, getting swept up the energy of their anarchic performance is pretty much non-optional. Even in the basement of an indie venue, they were able to deliver an all-consuming performance that allows you to forget that you’re standing in front of three musicians. There was synergistic chemistry found in both their abrasive stage personas and the delivery of their pummelling eerie rhythmic noise.

Manchester-based poet Leon the Pig Farmer also doused the crowd in his poetic vitriol in between the acts. With the penetrating parables which he’s able to draw from his savage wit and unabashed honesty, each performance cut just as deeply as the last. While many spoken-word artists rely on prosaic methods, Leon the Pig Farmer projects resoundingly raw verses in a way which truly revives the undiluted expression of the beat generation. Whether he’s spitting bars about the graffiti on the Peer Hat toilets or being viscerally honest about his mental health, the weight behind his words leaves an imprint which isn’t easily forgotten.

Perfectly rounding off the night were the guest DJs Kay & Gray with their back to back synoptically eclectic danceable euphoria-dripping earworms. It’s a rarity to hear DJs championing new artists and simultaneously appeasing the crowd. Evidently their needles are on the pulse of some of the best up and coming artists around.

Any fans of gritty despondent Psychedelic noise are going to want to check out the latest self-titled release from Parisian artist Foreigners Society.

If you could imagine the music of the Phobophobes, Sonic Youth, and Joy Division all merging in a cutting yet captivatingly melodic soundscape, you might be able to get an idea of what Foreigners Society has to offer.

The single constantly fluctuates between cold harsh Post Punk and dreamy tonally warm Psych Pop, and in part, offering both at the same time. If that isn’t a feat of aural alchemy, I don’t know what is. But what I do know, is that if I ever get the chance to witness that instrumental ingenuity live in the UK, I’m taking it.

You can check out Foreigners Society’s self-titled single which was released on January 2ndfor yourselves via Bandcamp.

There’s urgency in RVANA SHMATA’s music, an element that many could argue that’s missing from a lot of rock bands these days. Or maybe, it’s like Keith Richards said in his documentary on Netflix: “Rock n’ Roll abandoned Roll and became just Rock”.

“Well Hello” is a song that marginally, could be described as noise rock. The most distinguished element on this track is the suffocating atmosphere the drums are creating. I enjoy how the almost out of tune bass guitar is scratching my skin and the electric guitar which while it appears to be the most buried instrument in the production, however somehow it all works fine resulting in a tight sound. If your favourite part in a rock band is the rhythm section, I guess. As for the singing, on the clean parts, it sounds alright and when it’s time for some growling they sound even better.

This is a raw composition, regardless it doesn’t feel like it is pointless nor like it is lacking purpose. On the contrary, in this song I listen to a band that has an identity.

Listen to “Well Hello” on their Soundcloud page.