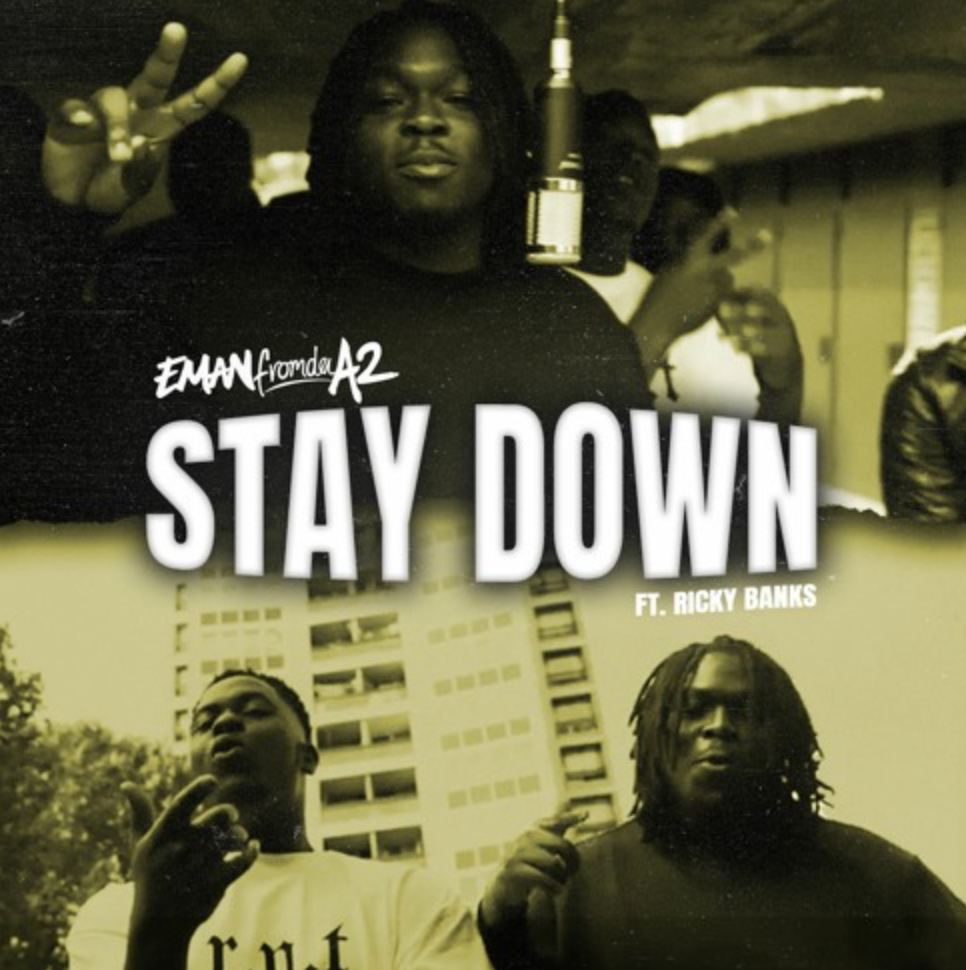 The funk-riding Afrobeat-inspired instrumentals give the up-tempo track a tropic touch while EmanFromDaA2 lays down his bars that he will quickly become renowned for under his new moniker. The first thing that grips you in the mix is the mindful and socially conscious wit in the lyrics. The lyric “It’s nothing new for us to stay down” hits you like a brick, but EmanFromDaA2 and Ricky Banks bring you right back up with their instantly magnetic presence.

Stay Down is due for official release on October 22nd. You can check it out for yourselves via SoundCloud.

Rising Brighton-based rap artist Milky has taken a bold step with releasing such a poignant, personal, and utterly confessional track as his debut single, but what a track it is; from the beautiful opening vocal courtesy of hometown friend Amy Owens, to the opening stanzas of Milky’s storytelling lyrical poetry (‘…those doctors can go fuck themselves/Yeah, I cut myself/It fuckin’ helps…’) ‘I Miss You Mum’ is just raw, open, and honest, and beautifully put together.

Released on We Are Not Saints records, a not-for-profit label and promotions company which works with musicians in recovery from alcoholism and drug addiction; Milky is, himself, a recovering addict, a theme addressed within the lyrics alongside the narrative of the loss of his mother when he was aged just seven years old.

It’s a stunningly powerful track, truthful and honest without being maudlin or melancholic, hopeful rather than downbeat. On the basis of this, there’s a lot more to come from Milky.

Every curveball twist in the soundscape, featuring pianist Hannah Doherty and American saxophonist KillBill Sax, leaves you more impassioned by Maple Struggle’s resounding talent and unique brand of urban alchemy. One minute, you are breathing in the smoke in a nicotine-soaked jazz club; the next, you are on the grimy streets of London.

Tip Toe isn’t just a stellar moody yet enlivening single; it quite literally leaves you giddy through the imagination and authenticity.

Tip Toe is now available to stream and download on all major platforms via this link.

With ‘turning trauma into storytelling’ as her modus operandi, ChinChin Iller is making serious waves in the UK rap scene. Her debut single, ‘As A Friend’, shares the all too relatable regret of allowing a relationship to evolve beyond platonic only to find duality and frustration.

When an artist is so bold, daring and open, for personal catharsis and to help the listener overcome self-confidence-stripping trauma, it is impossible not to pay attention. ChinChin Iller’s lyrics cut with the same sharp intellect as George the Poet and Kae Tempest. Paradoxically, she brings soul to a deadpan direct delivery while the beats celebrate the best of downtempo British hip hop.

As A Friend is now available to stream and download on all major platforms via this link.

Woozybeatz brought his unique style of DubWave back to the airwaves with ‘No Turning’ Back’, featuring GOLDEN G.

Since his 2017 debut, independent artist and producer Woozybeatz has continued to rack up the streams with his hazy, trippy beats. ‘No Turning Back’ is the latest dominant track to drop from the Northamptonshire, UK-based artist as Woozybeatz continues his mission to bring a unique style of DubWave to the airwaves.

No Turning back features the commanding drill hop rap bars from GOLDEN G, who brought just as much energy as Woozy brought with the beats that rattle under the bars and beneath the swathes of reverb, allowing Woozy to stay true to his moniker.

The grimy fierce track is the ultimate playlist staple for anyone who is through with apathy, staying humble and going all-in; between the grit and grind, you’ll find plenty of empowering introspection.

No Turning Back is now available to stream via Spotify.

Sparking up that tasty cali with a quality rolled release that settles your nerves from these wild times, A STAR expertly smashes those bars real hard, on the new gritty ten-track album that gives you hope about UK Hip-Hop again with ‘Samples‘.

A STAR is a fast-rising North London emcee with so much fire in his raw rhymes, his street stories about how he sees life is so relevant, in a strange world where there is so much divisiveness and confusion instead of just peace and love.

Its a happy night when all of your team make it home. This is an example of a wild story that tells you all you need to know about his current mindset and this is a striking insight into how things really are, away from what the often watered-down television says.

The particular highlights are definitely ‘Candle Light‘, ‘Smoke In The Air‘ (feat. Big Sam) and ‘Squad Goals‘. He swarms the mic with realness that will have you astonished — the busty beats seem to mesh like code on a crisp website — his admirable loyalty to his true family is noticeable, as his wordplay is wizardry-like and on a rare level of self-aware enlightenment.

‘Samples‘ from North London rapper A STAR, flows through your mind due to his top shelf lyrical delivery that has you bouncing your head and tapping your feet in adulation. In a genre where there is so much competition and artists come and go so quickly, he has claimed his spot right at the top of the underground where the best are at.

Stream this fire new album on Spotify and check out the visuals on IG.

If you’ve never been caught up in Rap artist Majick’s lyrical flow, his latest track ‘SpaceShip’ is the perfect track to introduce his forceful, energetic and impassioned approach to Hip Hop.

If anyone can put Hull on the hip hop map, it’s Majick with his captivating cadence and gritty lyrics that exhibit his wit and playful persona. After snagging a BBC Live Session spot with their bold and contemporary sound and their palpable hunger to keep collecting accolades, it’s easy to get excited about what else he will achieve in 2021.

You can check out the official music video to SpaceShip that dropped on February 26th via YouTube.

With angular indie guitars shimmering around steady drill beats and rap vocals finding the perfect balance between aggression and vulnerability, Jake Rosh’s single ‘Therapy’ is enough to leave you speechless as his emotions become as visceral as your own.

Many artists have attempted to capture lockdown-born frustration and depression while concealing raw emotion under glossy production and behind metaphors. With Therapy, dark and intimate thoughts act as Jake Rosh’s plaything, and he makes no bones about sharing.

He brings just as much authenticity to the UK rap scene as Scroobius Pip used to; if anyone’s got the lyrical wit to carry on his legacy, it’s the Merseyside rap veteran.

Hydra is due for official release on March 19th, 2021; you can check it out for yourselves here.