I’m Like A Ghost: Close to Monday looks for the much-needed exit on the spectacular ‘Split’

After the extensive success of their latest electrifying album called ‘Interference‘, Close to Monday return to hypnotise our entire consciousness with the thoroughly excellent ‘Split‘.

Close to Monday is a sensational Berlin, Germany-based synthpop duo that encompasses our invigorated ears with rasping electronica that is beyond what our brittle minds can perceive.

”Everyone will feel this song in their own way. someone will find it very strange. someone will see in it a reflection
of the crazy running of the modern world. and someone will be able to turn to himself, see something important
and become a little happier.” ~ Close To Monday

Close to Monday shows us what all the hype is about yet again with a truly scintillating single of the highest order, that might send shivers down your naked spine. The eloquently-projected story of looking for that sneaky escape exit rings true when one just needs to be free and explore the world to find for yourself who you really want to be.

‘Split‘ from the impressive European synthpop/electronic duo Close to Monday, is one of the more delightfully ear-warming singles around right now. With lusciously mysterious vocals and steaming production that seem to smoke out your heat-filled speakers, you can’t help but admire this fantastic track. With a true story about getting out of the maze of life that can mystify even the smartest out there, this is a release that is best with the volume on real loud.

Hear this sizzling new single on Spotify and find out more via the IG music page.

Bringing us a bass-thudding remix from the world famous German techno house wizard, Close to Monday lifts up all clocks nearby and skillfully floats them into a new dimension altogether with ‘Time’ (Dirty Doering Remix).

Close to Monday is an exciting Indietronica-fusion duo who are based within the live music mecca of Berlin, Germany.

”Heavily influenced by such huge bands like Depeche Mode and Muse, Close to Monday initially thought their sound would be tagged under the Synthpop and Electronic genres, but after much feedback they released that to limit their music to these alone was too restrictive, it has many, many more levels to it including those of Nu Disco, Indie Dance and Indietronica.” ~ Close to Monday

Featuring scintillating vocal ability that seems to gently bite on your shaking hand without leaving a mark, she takes us on a daydream of ultimate reflection with a simply stunning performance. You feel so engrossed into the marvelous production which has been given an extra boost – that was already rather excellent – to give off a tasty aura that bumps the speakers into the night, in such an effective manner.

‘Time‘ (Dirty Doering Remix) from the Berlin, Germany-based Indietronica-fusion duo Close to Monday, shows us that we definitely can’t turn the maze-filled experiences of the past into our corner, no matter what supposed superpowers we possess. Each moment we are alive counts to wholeheartedly love and be totally free, in this wild world which can have you changing in a moments notice if you aren’t too careful.

Keeping your eyes on that all-important time without letting it control you too much, is the cunning key to pure enlightenment.

Hear this terrific new single on Spotify and check out their IG music page for more music news.

Marty Gray’s latest synthpop album is enough to send you swooning back to the 80s while hanging onto the contemporary components of the mellifluous release that serves nostalgia and futurism side by side.

The single, Glory Days, may run at a slow tempo but the succinctly paced single never gives your mind permission to veer away from the devilishly clever progressions and the constantly evolving vocal timbre. The spatial effect in the synth lines allows you to sink deeper into the dreamy, fiercely passionate single that you’ll want to give plenty of repeat attention.

Glory Days is now available to stream with the rest of Marty Gray’s album via Spotify.

Dark, witchy, and edgy are just a few of the adjectives that first come to mind when listening to Mak London’s sophomore single, Cut Ya Clean. But it is so much more than your average brooding-pop-princess track, which we’ve heard so many times since Eilish declared herself as ‘the bad guy’.

Cut Ya Clean is an artfully decadent track; full of lavish authenticity that will undoubtedly see the Calgary-based singer-songwriter go far on her path to alt-pop royalty. The starkest reminiscences in the soundscape are the ones that bring Lewis Carroll’s The Queen of Hearts to mind.

Cut Ya Clean officially released on July 2nd; you can check it out for yourselves by heading over to SoundCloud.

Annie Elise – glorious technicolour with ‘We Can Pretend’

Synesthesia is one of those conditions that doesn’t get the widespread understanding it should; but imagine ‘seeing’ sounds in colour, different pitches producing different hues across the whole musical/rainbow spectrum. That’s what Annie Elise, originally a classically trained violinist, has going on, taking her neurological condition and using it to create musical compositions that produce the colours that she likes to see.

Taking a break from production duties for Dawn Patrol Music, and eschewing her violin in favour of electronica, ‘We Can Pretend’ is an upbeat dance-biased synth-pop number, sequenced sounds and big beats working alongside Elise’s gentle vocal to deliver an easy, elegant europop track that’s big on catchy hooks and delicately worked melody – think gentler Charlie XCX, Little Boots, or Robyn, with a serious touch of Suzanne Vega’s chilled sing-song delivery and you’re in the right area. The sun’s shining, we’re drinking chilled Belgian beer from little stubby bottles, and ‘We Can Pretend’ is the perfect summery pop ear-candy soundtrack. Aaaaand relax.

Check out Annie Elise here or on YouTube; check out ‘We Can Pretend’ on Spotify or Apple Music.

Bordeaux-based queer, feminist electronic music producer Elanor Idlewood has released her latest single, Akito’s Madness. Hit play to escape the 21st-century and immerse yourself in the golden era of synthpop.

Akito’s Madness provides 5:47-minutes of unadulterated, reverb-swathed synth lines that eclipse the 80s synthpop sound while boasting a sense of cinematic futurism which is prevalent in Idlewood’s distinctive yet immediately accessible production style.

Music became more than just a hobby in 2019 when Elanor Idlewood established herself as an independent artist. If Frankie Goes to Hollywood, Depeche Mode, Orbit, and Kraftwerk are on your playlists, Akito’s Madness should be too.

Akito’s Madness is now available to stream via SoundCloud. 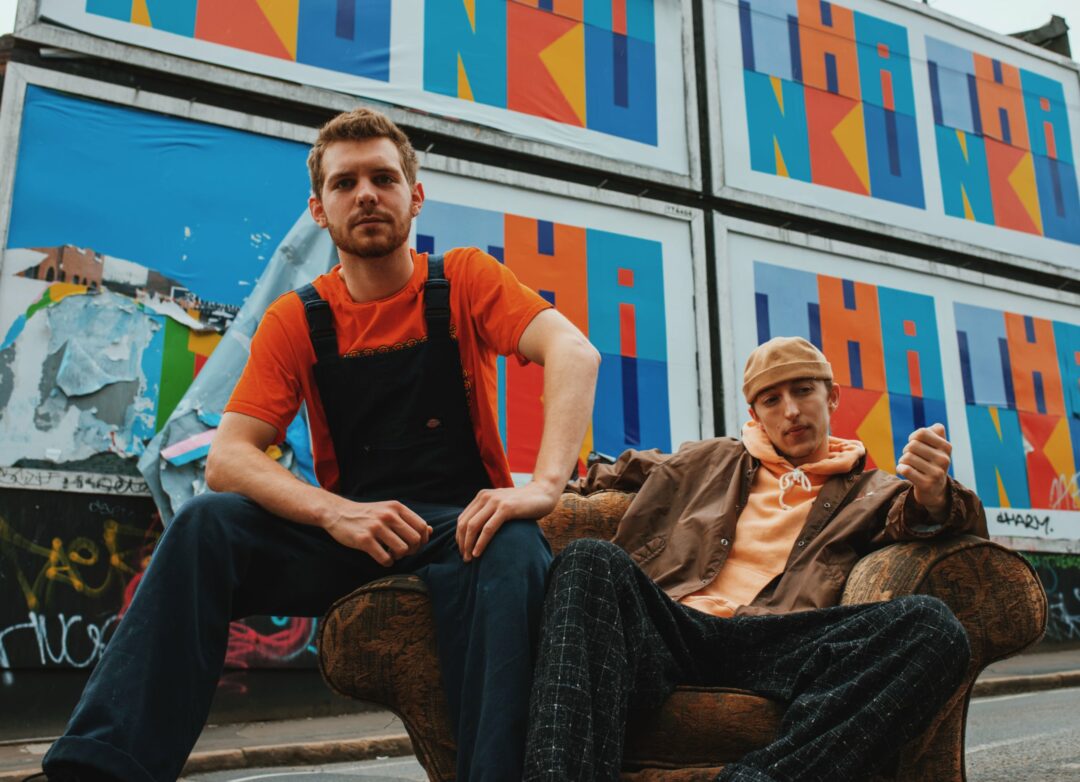 The UK duo The Moontown Project is back with their indie vibes, post-punk lyrics and genre-evading electronic beats with their latest single, ‘Mademoiselle’.

Ingeniously, the Moontown Project captured club atmosphere in a way that doesn’t give you that stir-crazed desperation for life to return to ‘normal’, but in a way that allows you to vividly revisit the times that came to you on a dancefloor and will stay with you forever.

With their second single, the Moontown Project’s sonic palette consisted of two step rhythms, funk-riding bass and synth lines that tie the track together and create an immersive electro house vignette of dancefloor culture and euphoria.

The duo that consists of Will Swain-Smith on guitar & lead vocals and Guy Molony on keys, bass & lead vocals made waves in London prior to their recent relocation to Leeds which marks a major shift in their career and determination to allow their sound to resound far beyond the districts of London.

Their debut single has already received attention and airplay from BBC Introducing: London, Amazing Radio, Hoxton Radio, Independent Music News and Soundwave Magazine. After signing with Stogey Records, they are set to truly come into their own in 2021.

They have major plans to take their fusion sounds on tour across the country, and thankfully, fans won’t have to wait for long before another ethereal release from The Moontown Project. Don’t just get them on your radar, get them in your gig diary.

Mademoiselle officially released on May 14th; head over to Spotify to hear it.

For their retro pop debut, Magenta Dusk teamed up with Sevda B and released the synth-wave track, ‘Give It Up’. It’s exactly the kind of track that you’d want to be born in the wake of a global pandemic. It fits the mood with almost serendipitous accuracy; within the reverb-laced progressions, you’ll feel a sense of deep longing, reflecting and trepidation-infused hope.

The Nottingham-based synth-pop producer who seeks to find harmony within dark textures is sure to make waves with his debut single. He pulled plenty of soul-awakening harmony to the surface with Give It Up while simultaneously creating the perfect platform for Sevda B’s tentatively optimistic vocals that will undoubtedly speak those with a tendency to lean towards existentialism.

The Party That Surrounds You: Jaguar Jaguar urge us not to panic on the mesmerizing new single ‘Post-Op’

Jaguar Jaguar is the exciting Minneapolis, Minnesota-based dark synthpop/indie rock act with a style that is so unique you will need to listen twice, as they intertwine together such mysterious sounds which mystify your mind to unlock a new level.

This is the story about feeling like an outsider, you are in the party but you can’t seem to get into the proper zone and feel like you are in a different world. You wish that you could change and become someone else, as you think about turning into a new face that will be alive and taken notice of for once. You know not to panic however, as things will change around soon if you break away from this stale energy, that has tied you inside.

The multi-skilled sounds are so gripping and has you impressed by the different layers that are somehow spellbinding and complex – each verse changes up without notice – and twists your mood into a frenzied state of hypnotized enjoyment.

‘Post-Op‘ from Mineapolis three-piece indie rock/synthpop outfit Jaguar Jaguar, leads us into an underground world where so many get lost in, as they reside into their own deep thoughts that can lock you into a different mindset, that can be so different to breakout from. With a unique sound that has you listening so close, they are a fascinating band full of so much promise.

Listen to the new track here on Spotify and check out their IG for more visuals.