A True Escape: German electronic artist Verena Hentschel is quite superlative on her ‘Break Out’

Taken off her wildly creative 9-track album ‘Transformation‘ which is based on field recordings, Verena Hentschel sends us a world-class performance via her made-for-movies track that shall have you looking around nervously called ‘Break Out‘.

Verena Hentschel is a Cologne, Germany-based indie-electronic composer and visual artist (painting/visual media). This is a supremely inspiring young woman who has impressively obtained a Master of Music in Electronic Composition and a Bachelor of Music in Music and Media.

”The focus lies on the experience of sound and visuals and ranges between rhythmic-percussive elements and experimental soundscapes.” ~ Verena Hentschel

On a new single for the ages that has you feeling so compelled to listen loudly again and again, as its attention to detail is quite marvellous – Verena Hentschel might be up there with one of the best underground artists we have seen in a long time.

‘Break Out‘ from the Cologne, Germany-based indie-electronic composer and visual artist Verena Hentschel is one of the most creatively stimulating tracks you might ever hear. This is a seriously talented multi-creative who makes that spiritually-awakening experience that sends shivers down your spine that you can’t explain. You feel like you are in nature here as you look for your escape from danger, and there is so much to love about this excellent track that is absolutely spellbindingly brilliant.

Hear this astonishing new single on Spotify and be sure to see this enthralling visual on Vimeo.

In Motion: Remarkable German electronic music producer GRAY shows us the way on her ‘Fractal’

With her highly-acclaimed skillset revealing to us a vividly cultivated track that is always in beautiful motion as she intended, GRAY sends us into a whole new world with the first single of her upcoming EP called ‘Dialogue Systems‘, with ‘Fractal‘.

GRAY is a well-conceptualized project by Cologne, Germany-based indie electronic music producer and well-established designer Stefanie Grawe, who blends in her love for design, music and technology, into an original work that is highly impressive to witness.

Swelling up our curious minds with something so appealing in a peculiar world that is frequently flashlight-free and full of dreaded darkness, GRAY sparks up our enchantment with a breathtaking presentation that has your spirit alive with plausibilities of what the future holds. There is a real class here that is embedded into the almost-crystalized creation here, that seems to bring a warm feeling of hope to your whole awareness.

‘Fractal‘ from the composed Cologne, Germany-based indie electronic music producer GRAY, is a breakbeat experience that will have you completely transfixed into this new planet that has been assembled by such an incredibly talented artist. Her visionary standard is for all to see here and this is something so unique, which in a world full of lazy copycats, is a real wonderous experience to absolutely be enamoured by.

Hear this outstanding new single on Spotify and see more via the IG music page.

With his first EP set for a much-awaited January 2022 release, Ogtopus shows us the tasty waves that only helps the soul feel better on the treat-filled debut single ‘Two Shades‘.

Ogtopus is an ocean-loving Cologne, Germany-based multi-creative indie funk-rock/trip-hop music producer/artist, pianist/guitarist who is inspired by all things shapes and colours, as he seems to see further inside the whole picture than most.

Ogtopus transports us to his well-constructed underwater vibration that has you dusting off those lonely goggles, and going for a well-deserved swim to a community that is so much freer than what we see and feel on land. His vocals have a thoughtful nature and mixed with an ear-enhancing beat, this is a splendid song for everyone to lay back to and chill with.

‘Two Shades‘ from the deep-thinking Cologne, Germany-based indie funk-rock/trip-hop music producer/artist Ogtopus, is a rhythmical gem that will capture your imagination and set you free from all self-doubt. This is a highly creative artist who is only getting started – that performs with an experienced edge that gets your feet tapping – to a hearty beat that is so catchy and highly likeable.

Hear this brand new track on Spotify and see more news on the IG music page.

As they both look outside the tainted window and tell us exactly what they see, K3NDY (feat. Rass Limit) show us into their honest world of knowing that greed and selfishness of so many in power, will be the end of the human race before too long on ‘Ground Zero’.

K3NDY is a Cologne, Germany-based indie singer-songwriter who fuses emo-pop and rock-punk together into one explosive mixture of incredible sounds. She has linked up with fellow Cologne-based former rapper and now punk artist Rass Limit, as they show obvious chemistry, to lab up a powerful concoction which is one of the more truthful songs of 2021.

They know we are so lost as a race, as they confidently step on the gas and throw down all the cards onto the table. The guitar skills are highly impressive, as the honest lyrics link so well together with vibrant vocals that has your head moving and your mind working extra. You know that they are right and the time for change is definitely here, before it is too late and the whole world burns down.

‘Ground Zero’ from the unmistakably talented Cologne singer-songwriter K3NDY (feat. Rass Limit), is a thunderous display between two artists who mesh so well together. Hand in hand, they take us on an honest ride through the streets to see the destruction – on land and water that will ultimate define us as the generation that didn’t do enough – to stop the hurtful carnage that is seeping into our planet each second.

Always wanting more has turned so many into blood thirsty zombies, and this is crushing all the love that has been build up over so many centuries before us.

Hear this top new song on Spotify, check out K3NDY’s IG plus Rass Limit’s IG too.

Nicolai Liesner send us a piece of playful pop pureness with a real twist, on his latest exciting track called ‘Game Called Love‘.

Cologne, Germany pop singer-songwriter/producer Nicolai Liesner is a youthfully exuberant artist, who makes that crystal clear music that is so easy on the ear and keeps your feet tapping all the way through.

The smooth acoustic simmers at first, followed by the background vocals that are instantly catchy. This feels like a top song already and then we are immersed into the story that feels so real. He sings with an air of honesty and this is such good music that deserves our undivided attention.

This is a song about love, hate and relationships in this crazy world that is so quick on the eye and flashes before you like a video game. There are so many distractions and our mind battles to take in all of the information, unless we sit back sometimes and slow down to let it all manifest in our buzzing brains.

‘Game Called Love‘ from German pop singer-songwriter/producer Nicolai Liesner is a smooth single full of moments in life that most of us are still trying to work out. We care about people differently but sometimes you meet someone that takes your heart the moment you set your eyes on them. Throughout your time with them there might be mixed feelings but if you care about each other enough, you will speak up and work it out.

Stream this fresh new track on his Spotify and see more from this talented young artist on his IG. 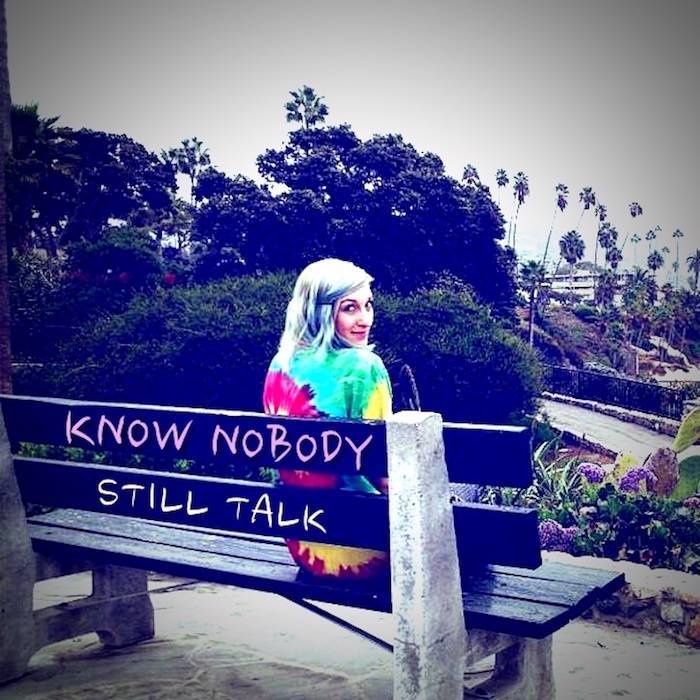 Still Talk is a project based in Cologne with a very particular sound that is an intriguing blend of stylistic elements. The fundamental basis of Still Talk’s music is rooted in the rock sound but as is evident in their recent release “Slow Sunday” the music also features a more commercial aspect and a particularly indie sound. “Slow Sunday” itself, as the name suggests is all about the little things that happen on a Sunday and how the lead singer Tanja Kührer relates them to emotions and thoughts. Apart from being image evoking, the lyrics, music and vocal delivery also create a gentle atmosphere which is not often associated with the rock sound.

Starting off with a soft blend of guitar sonorities along with a steady, and very present, drum groove, the song expresses a very particular character which, as the vocals come in, feels somewhat dreamlike. The vocal tone floats over the rest of the instrumentation and this addseven more depth and dimension to the overall sound. It is also very interesting to note that as the lyrics unfold, the music together with the still actions in the music video start to portray those slow Sunday mornings more and more realistically. Overall Still Talk definitely show that they are able to portray an artistic vision very effectively, both through sound and video! Check it out now!

They may be new kids on the Philadelphia rock block but Cologne have really arrived with a fully formed sound. One part stadium rock, one part indie cool and one part pop accessibility, it is hard to see who they wouldn’t appeal too. Musically it gives them great scope to build sonic architecture in the space around them but also play with subtle musical dynamics, deliver songs dripping with euphoria but also commercial accessibility.

And it is this fantastic generic balancing act which sets them apart from the pack As popists and rockists wage pointless pitched battle, Cologne clearly adhere to the cult of the song, preferring to take the role of tunesmiths who exalt composition over flash and muscle. If this song is the perfect rallying point for those who have long understood that this middle way has always sported brilliant acts – pop acts muscled up by a dash of rock, rock acts whose bluster is tempered by indie details and indie acts happy to explore pop immediacy – then the fact that hey have an e.p. called New World available is just the icing on the cake.

Rass Limit is a conceptual Hip Hop artist from Cologne, Germany. His brand new debut hit proves that there’s more to Germany than pounding electronic industrial music. He’s orchestrated old school R&B Hip Hop with rap arrangements worked in for a contemporary sound that impossible to ignore. He’s definitely not shy when it comes to expressing is feelings through his veracious lyrics which are packed with all of the attitude that you’d expect from a Hip Hop artist.

Whilst the beat behind his debut track ‘I’m Like’ is pretty limited and minimal compared to most Hip Hop tracks it accentuates his lyrical ability and the anger behind his progressive lyrics. It almost has an acoustic element to the backing which is rather becoming for the home grown artist.

I’m definitely looking forward to hearing more from the visionary Rass Limit after this 2 minute taster track, but it’s all you need to get hooked on his beat after this antagonising quick listen in which he provides an abundance of animosity and crass style.