It is all about the old school grooves in the luxe hip hop debut from LA newcomer Ahmad Nur. ‘Old News’, featuring Mauni Maun, throws in RnB vocal melodies and Snoop Dogg-level chill rap bars on the inventively distorted jazz-infused instrumentals, which immediately sets Nur apart from the rest of the up-and-coming names that have flocked to the airwaves in 2022.

Yet, the far more striking distinction in Old News is the soul that was thrown at it as a consequence of Nur’s anger that racial injustice is old news once again – despite all of the issues that sprawled across the headlines are still happening every day, just as rampantly.

Old News is now available to stream via Spotify.

King Brian, AKA Brian Christopher Brown, is an American singer-songwriter, dancer, filmmaker and producer; he poured all of his cinematic poise into his latest single, Reparations. Starting with the hard-hitting lyrics ‘we’ve been cursed for so long, but we are still strong’, emotional investment in the single is non-optional.

His latest single does plenty more than just run you through 400 years of sufferance and oppression; it acts as a celebration of every triumph over adversity. King Brian takes plenty of influence from artists such as Michael Jackson, Tupac and Prince; there may not be much sonic resemblance in the soundscape. Yet, Reparations undoubtedly carries the same sense of soul that will test your own soul’s capacity to feel.

The Radio Edit of Reparations is now available to stream and purchase via Bandcamp.

Recorded at the legendary Dr Dre’s house and featuring one the rawest emcees in the game, Erik “Blu2th” Griggs shows the world that he can do it the indie way on his massively impressive debut single that will have you turning the volume up to the max called ‘IS IT THE END OR THE BEGINNING‘ (feat. Hopsin).

”He is best known for his involvement in the song ‘No Air‘, with Jordin Sparks and Chris Brown. On No Air, he’s the principle writer and co-producer with The Underdogs. He has written with the likes of The Underdogs, Tim & Bob, and Babyface to name a few. In his first three years in the industry, his work earned him a People’s Choice award, a BMI Song of the Year award, and a Grammy nomination.” – Erik “Blu2th” Griggs

The absorbing vocals are top quality here with a smooth beat that is haunting and has your attention totally locked in. The raps are raw and emotionally charged, as the lyrics combine to tell a story that seems to be so common in the USA right now. Things need to change as quick as possible before the rocks fall apart even further to cause a landslide like none other – with so many leaving Los Angeles already – to avoid the absolute mess that seems to be spilling all over messily like an overturned oil tanker.

‘IS IT THE END OR THE BEGINNING’ (feat. Hopsin) from Erik “Blu2th” Griggs, captures 2021 perfectly and has us invited into the stressful world that so many men and women of color see and face in America currently. Things are an absolute shambles currently with way too many dying for no reason, prisons full of people who shouldn’t be there, and a huge distrust with the law who should be there to help its citizens. This is a tremendous track that will strike heavily into your heart, as you wonder what and where the solutions will come from, before total carnage destroys even more innocent lives.

This might be one of the most criminally underrated and vitally important messages of 2021 already. Its up to us to open up our eyes and choose who to support. True peace needs to prevail, not unnecessarily profitable war. Black Lives Matter. 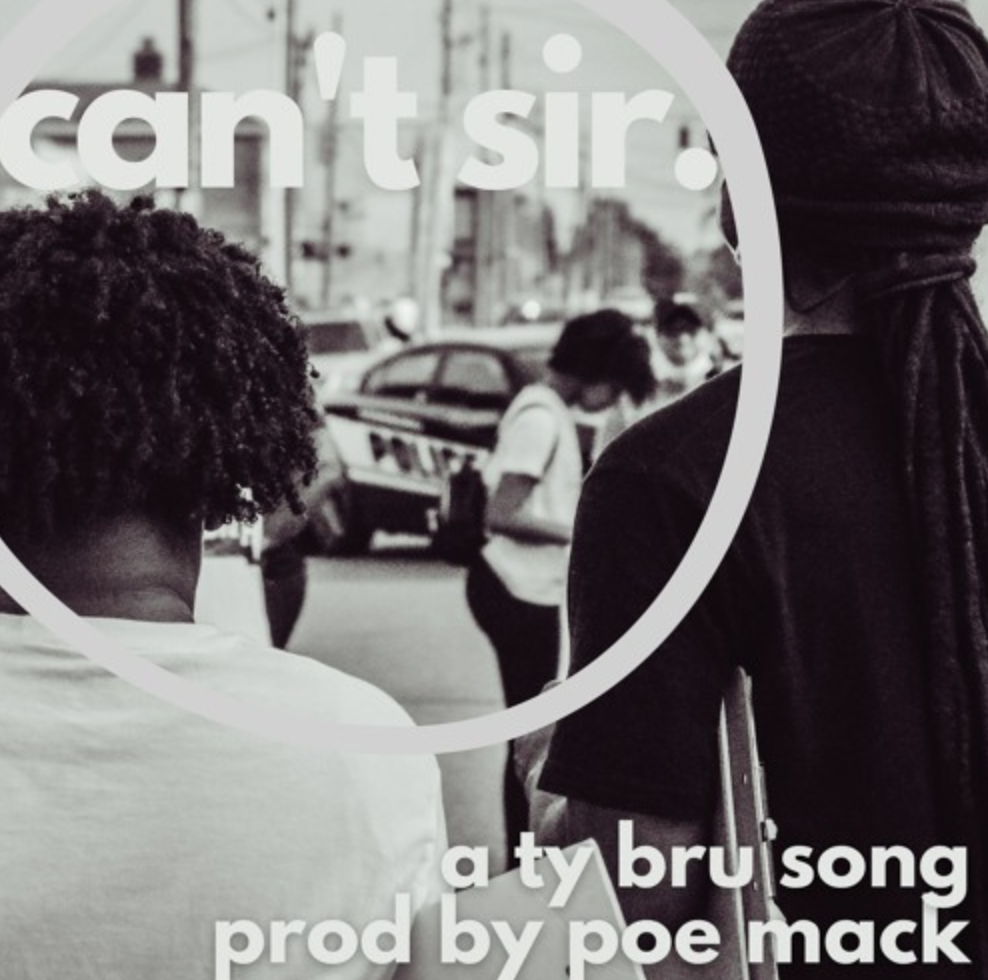 With his latest single, Can’t Sir, the luminary hip hop artist Ty Bru proves that forceful, convictive compassion is the most efficacious. The release of the single commemorates the first anniversary of the Eastside March in Asheboro, NC. It was just one of the singles released by Ty Bru on June 6th to keep the reason for taking to the streets fresh in minds.

Can’t Sir runs through the glaring issues within our society that infuriate you every time they come to mind due to the unfathomable injustice behind them. Yet, through the passion in Ty Bru’s bars, you’ll find the inspiration to find the same resilience and refusal to accept that systematic oppression has had the power to ruin dreams and lives for generations.

Can’t Stir is now available to stream via SoundCloud.

Memphis-hailing hip hop artist 2Deep the Southern President paved the way to mental resilience with his latest single, ‘2020’, that dropped on March 20th.

By utilising his talent for storytelling and lyrical wordplay, he was able to summarise the atrocities of 2020 and create a time capsule that we’ll be able to throwback to in years to come and hopefully see how pivotal it was to spark social change.

With lyrics such as “it took a pandemic for white folks to notice their knee on our neck, it has been there for a hundred years, can we finally get some respect”, it’s a sobering track that unapologetically asks the listener to see past the media spins, look into the root of societal sickness and do something about it.

It’s a stellar feat of old school hip hop, born from 2Deep the Southern President’s affinity for artists just as Jay Z, UGK, Outkast, 88 Ball and MJG. His sound already packs the same punch. For your sanity’s sake, get him on your radar.

The official video to 2020 is now available to stream via YouTube.

The LOOP – See Me Beyond My Skin featuring MZ Starr & Marcia

Boston-based RnB pop duo the LOOP made their debut in February 2021 with their soulfully interrogative single, ‘See Me Beyond My Skin’, featuring collaborative artists MZ Starr and Marcia.

It’s the pinnacle of elegance as it confronts subconscious and conscious prejudice and invites the listener to look deeper when attempting to understand women of colour. The single possess plenty of sonic power, but the real weight in this single is how it allows you to find compassion for people who are in view but never truly seen.

Hopefully, one day, tracks such as See Me Beyond My Skin won’t need to exist; for now, we’ll have to heed the words of artists such as the Loop who are bringing that day closer with their melodic grooves, unfiltered lyrics and harmonically sweet vocals.

See Me Beyond My Skin is now available to stream via Spotify.

If you’re looking for a fresh Hip Hop album to see you through the cold, dark and lonely months, there’s no fresher and more consoling feat of Hip Hop than Tae Gwapo’s 2020 album, ‘Winter Baby’.

By using chillingly angular Indie guitars around solid 808s and putting plenty of atmospheric electronic effects in between, Tae Gwapodelivers authenticity and accessibility simultaneously with Track 1, Good Luck. From there on out, you’re in for an emotional rollercoaster through the dynamic release which features high-vibe hits such as the enamouring track ‘Ned Flanders’.

The standout track has to be Mill Ticket which will test your capacity for compassion as Tae Gwapo shares introspection on what it’s like to endure America as a Black American. The delicate piano notes give way to an evocative production which doesn’t sugar the pill when it comes to tearing into systemic racism, but the tone is tender and sweet all the same.

Winter Baby is available to stream via Spotify.

2020 has sucked for so many reasons, but the amount of perception-shifting consciousness it has brought to the airwaves almost makes up for it, such as Terrell’s debut single, ‘Wishes’, which shares a poignant depiction of the struggles which young black Americans face day in day out.

If you’ve been paying attention, you will know how systemic racism still hinders the progression made by black Americans. Wishes asks you to find some compassion for the sufferance. With Terrell’s cutting RnB vocals, you’ll find it hard to refuse.

You can check out Terrell’s soul-baring single Wishes for yourselves by heading over to Spotify. 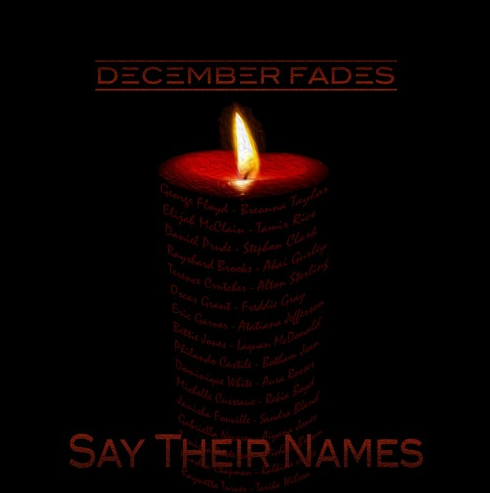 We all need to slip into a little minor-key melancholy from time to time when we want to be torn away from our own pensive narratives and tune into new ones to find less-odious ways of viewing the world.

December Fades’ latest single Say Their Names does exactly that. It poignantly, poetically and powerfully commemorates the lives of Breonna Taylor and George Floyd while softly, scathingly attacking the injustice which brought about their deaths. It may be a sorrowful single, but it affirms that beauty can bloom from tragedy. December Fades and their darkly soulful approach to Pop is exactly what 2020 needs, a reminder that vengeance doesn’t need to be violent or ugly. Kill them with kindness. Kill them with poetry entwined in melody.

Say Their Names was released on October 23rd, you’ll be able to check it out for yourselves by heading over to the artist’s Spotify.

Armour is an American singer-songwriter, rapper and poet. He is brilliant here on this new single. After releasing ‘Can’t Pierce Armour‘, ‘Knight In Shining Armour‘ & ‘Newz Flash‘ recently, he is on a tear in 2020. With a gloomy beat that soon kick-starts into place and the engine hums nicely here on this fine song.

‘Tik Tik Boom‘ is all about the looming fires that have burnt our world and in particular, the USA. The politics in the country are messy at best. The current system is not working and changes need to happen as soon as possible. The rain is falling down hard and the things are going to explode soon as we are on the tip of even worse things.

The lyrics and fire delivery starts off with fire here and Black Lives Matter is discussed here. The beat swarms and the vocals become even grittier as the song just gets better and better. This is a powerful Hip Hop statement and one that all fans should check out. This is a fairly new name in the game but this is a real talent with a wordsmith attitude. ‘Tik Tik Boom‘ is a top track from Armour.

Head through to the Spotify page.