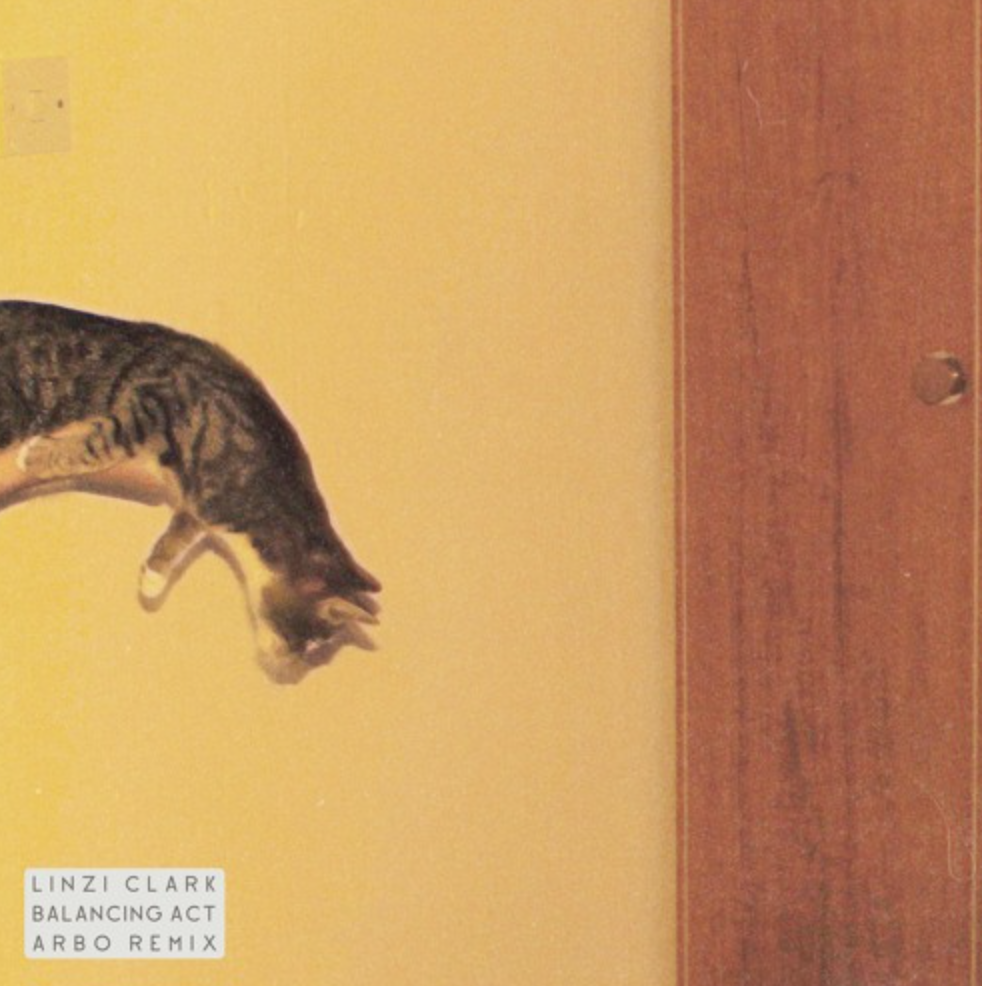 After winning over a significant proportion of the Scottish population with her debut single, All I Have Now, the Paisley singer-songwriter, Linzi Clark, collaborated with a fellow local artist and producer, Arbo, for her stylishly sublime sophomore release, Balancing Act.

The arty and ethereal feat of electronic trip-hop, which was remixed by Arbo, is a transcendent triumph of up-vibe electronica that allows the shimmering melodies to speak to you on a soulful and primal level. Sonically, Linzi Clark’s inspirations include Four Tet, Juliana Barwick and Bonobo. Lyrically, she takes influence from the icons Joni Mitchell and Regina Spektor. With that combination, alchemy was always a guarantee. Especially with Arbo’s arrestive percussion-heavy ambient sound that we hope to hear plenty more of. Quite notably Arbo and Clark are an unstoppable ambient electro force.

Mallaigh Ashton made the alt-90s her own with her latest dreampop single, With a Song

NYC-hailing singer-songwriter, Mallaigh Ashton, made the alt-90s her own in her indie dream-pop release, With a Song. Reminiscences of Mazzy Star are there, but nothing about With a Song feels fractionally assimilative. There’s a real sense that part of the alchemy in this track is from Ashton’s creative passion and unfiltered poetry spilling into a mic.

Her vocals get just enough prominence in the release to give the cutting lyricism on in-love-anxiety a firm hold on your heartstrings but there’s still enough synergy with the soft shoegaze guitars to give With a Song an almost phantasmal mellifluous air as it alludes to just how fragile love can make you.

As a staunch shoegaze fan, it is always daunting discovering new up and coming artists borrowing tones from the alt 90s, but the cynicism soon faded after hitting play on With a Song. Mallaigh Ashton is a matchlessly breath-taking artist.

With a Song is due for official release on March 4th; you can check it out for yourselves via SoundCloud and Spotify.

Ahead of the release of his fifth 100% DIY album, Hurts, the alt-indie British singer-songwriter, OneNamedPeter, has given us a teaser by letting us taste the cosmic pop textures in the bitter-sweet title single.

If you took Prince’s solos, Elliott Smith’s raw songwriting style, the dreamy chamber pop style of Daughter, the spacey gravity of Bowie and threw them into an aural cocktail with orchestral motifs to boot, it would pour just like the intoxicating soundscape, Hurts.

Nothing about the high-fidelity production feels less than professional. OneNamedPeter knows just how to conjure enough alchemy to wrap around his lyricism that explores the pleasure and pain connection.

Hurts is one of those tragically rare releases that you immediately know you’ll want to dive into time and time again. We’re stoked to hear how the LP ensues after the title-single set such a blissful and accordant tone.

Hurts will officially release on March 4th, 2022. You can check it out for yourselves by heading over to SoundCloud.

The Low Highs cut to the core of romantic scorn in their psychedelically dreamy alt-indie single, Don’t You Ever

The South Florida residing alt-indie duo, The Low Highs, have released their eagerly anticipated sophomore single, Don’t You Ever. The mellifluous earworm allows dream pop, indie psych and folk-rock textures to pull together in the atmospherically absorbing release that cuts to the core of romantic scorn.

Don’t You Ever captures the disjointing feeling of realising a relationship was filled with empty promises of perpetuity before exploring the confusion that leaves us questioning every exchange and retracted extension of affection as though our interpersonal history has been rewritten with the utterances of a few words.

The Kraftwerk-y style melodic synths and funky indie disco percussion paired with the hypnotically distorted vocals make exploring those torrid emotions infinitely easier. You’d be hard-pressed to find another up and coming outfit bringing a better aura to the airwaves. It’s almost ironic that a song on empty promises was so promising.

Don’t You Ever premiered on January 21st. You can check it out for yourselves by heading over to YouTube.

Get your catharsis fix with Dawn Shy’s debut ambient electronica single, Of Morning

Of Morning is the debut single from the up-and-coming solo artist Dawn Shy (Charlie Howson). The trippy downtempo electronica mix lets the drumbeats kick under the echoey, chamber-y reverb that makes Of Morning such an indulgent aural dive. Especially with the sporadic vocal samples that amplify the haunting nature Of Morning. Little more is said than the repetition of “I promised you”, but the timbre of the instrumentals that flit between light and dark textures more than gives the context.

Ambient producers have their work cut out for them when it comes to establishing themselves in any given scene. Dawn Shy succeeded nonetheless, thanks to his impeccable sense of timing, command of cathartic progressions and ability to reflect emotion through melody. His solo project may have been born through the end of uni boredom, but he is definitively one to watch

Of Morning is now available to stream on Spotify.

If you ever needed definitive proof that no city breeds dark indie like Manchester, delve into the atmosphere in Fox Evades’ latest single, Strange Forever.

With a beguiling vocal style reminiscent of Jo Bevan from Desperate Journalist paired with the instrumentals that will remind you why you fell for post-punk and new wave in the first place, Strange Forever is an indulgent hit of tonal nostalgia.

When it comes to the substance in this viscerally evocative confession, Fox Evades well and truly stands in a league of their own. There comes a time in every outlier’s life when we acknowledge that we will never grow into normalcy; Strange Forever captures those cutting feelings while unifying the similarly minded with the lyrical affirmation that it’s a choice to be alone.

Strange Forever will officially release on February 25th. You can check it out for yourselves by heading over to SoundCloud.

The Minneapolis-based alt dream-pop artist that is never short of mesmeric material, speakeazie, has released her highly anticipated debut album, Prohibition Hippie, featuring the standout single, Disintegrate, which spins an engrossing narrative tale of a young girl losing control. Anyone that has ever felt their mask of sanity slip will undoubtedly want to delve into this compassionately orchestrated single.

Disintegrate shares a tonal palette with Echo and the Bunnymen’s earlier material. But with the instrumentals distorted via the wobbly tape delay effect, the bedroom pop single takes an authentically demure form.

speakeazie’s vocals parallel the evocative power of Florence Welch while keeping in line with the contemporary moody indie-pop vocal trend. By that we mean they are alchemic leagues ahead. Also written into Disintegrate’s mix is speakeazie’s influence of dreamy retro aesthetics and the 1920s. It is inarguably one of the most distinctive releases that we have heard so far this year.

speakeazie’s debut album is now available to stream on Spotify. Or you can check out the video on YouTube.

The South London songwriter and writer, Joseph Lothian, has recently released his sophomore album, which is a continuation of the wild and verdant chamber pop soundscapes in his 2020 debut album, Wilderness Music.

Wilderness Music Continued (Rain, Fire), is a meditatively artful infusion of electronic folk, indie and alt-pop which focuses on the act of songwriting, with a view to how it creates comfort and value in otherwise inhospitable environments. It’s hard to argue with that sentiment. Without the icons that have defined the culture in the UK, how disparate would our streets feel? How many outliers would know nothing of experimental expression or know how it feels to find their mindset tribe?

The standout single, Glacial and Spa, is just as evocative as an Angel Olsen release with the vibrato on the vocal. Yet, within the lush textures of the chamber pop single, there’s a nuanced reminder of our roots and the fact that we were never really supposed to endure post-industrialised isolation.

Notably, there are few genres that the 18-year-old artist is unwilling to draw from in his eclectic sound. Around the angular indie guitars that are fed through plenty of echoey tape delay, there are hints of 80s pop, soul, and a smattering of indie-funk to bring the grooves. Cade Whitt’s connectable resolving indie vocals are the cherry on the aural cake, as they work through the consoling lyrics in a semi-lucid fashion; it’s a vibe.

Check out Loud Thoughts on YouTube, Spotify and Apple Music.

With the baroquely orchestral strings against the cinematically dark electro elements and HVIRESS bringing just as much alchemy to the mix vocally with their gothy occultist harmonies, Golden Apple is a bewitching triumph of a single from the dark pop duo.

If Emilie Autumn broke out of her Victorian anachronistic bubble and entered the realm of demure pop, the results would be equally as indulgent as the darkly imaginative single that also plays with tribal and apocalyptic themes.

You can watch the equally as artistic and obscure Lolita-style music video that premiered on February 11th for yourselves by heading over to YouTube.